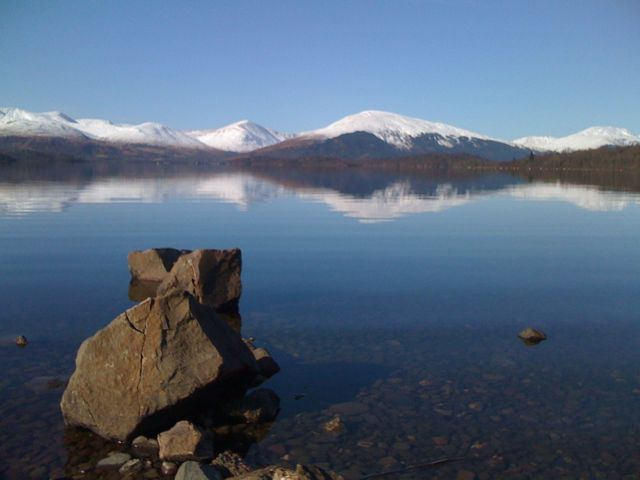 After posting i realised the pictures were too large for the page, i cant fix this without re uploading pics. This is all done from iPhone with poor signal & would take me all night.

Surprisingly I had a good nights sleep, it was cold but the PHD down socks did the job and kept my feet toasty. I didn't wake until 7:20 and looked out the tent to see a fantastic blue sky and the prospect of a gorgeous day ahead.

I quickly packed the tent and decided to get some breakfast in Balmaha rather than making anything. 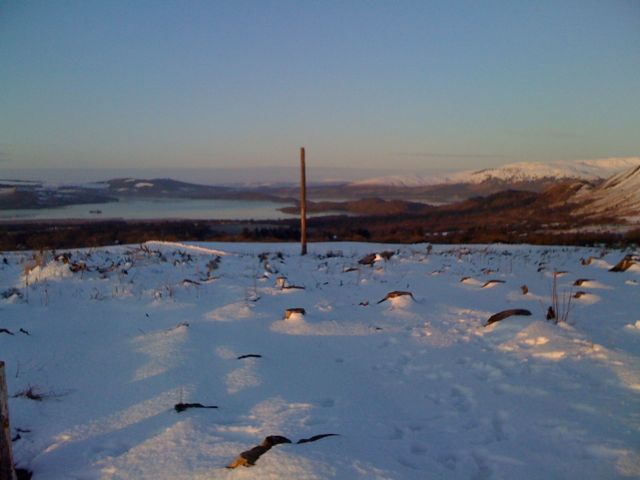 It was a good decision to camp, the views from the spot were fantastic. The other bonus was the snow that was soft yesterday was now frozen solid, allowing me to walk on the snow rather than sinking.

Once the tent was packed and photos taken, I set off for Conic Hill. I could see where yesterday I would of had some fun up to my waist in snow. Today though, I walked along the top. I did lose my Pacer Poles down holes a few times that came to the top of them.

Once I got higher up Conic Hill, rather than it getting colder it was a bit warmer and the snow was softer making it much harder work. As I rounded the hill, which is really a series of humps I was thinking about cutting up the first. I noticed a large amount of snow had fell down the side in a mini avalanche and could see a bit of an over hang at the top. I walked on and decided to cut up the third mound, I'm not sure which is the highest. 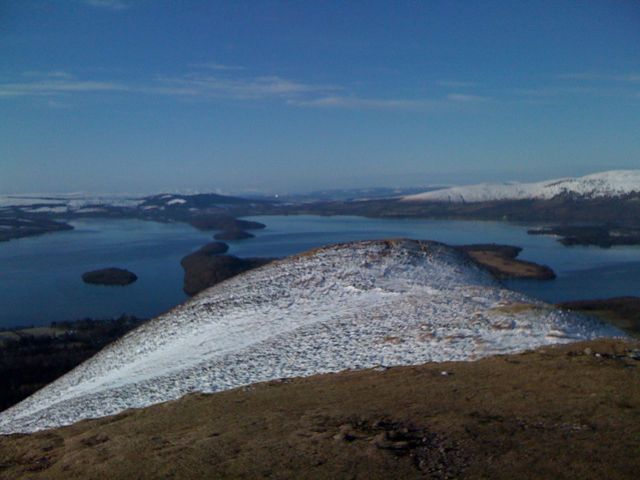 The views from the top were fantastic and I spent a while up there taking pics on the camera. It was a shame to leave but I was hungry and wanted some breakfast.

Just before reaching the woods above Balmaha, the snow disappeared. A few minutes later I was wandering into the car park. Only to find the shop open on weekends and the toilets locked, great. The only other place was the pub/hotel but this looked like it was only for residents. Instead I sat on a bench looking out at the marina, eating a cereal bar & some M&Ms. 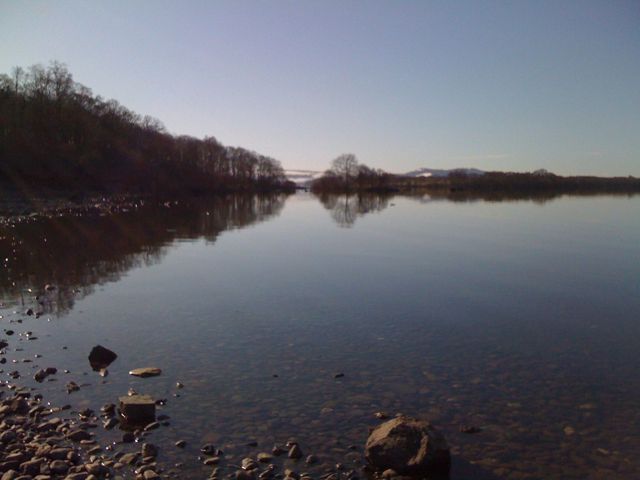 The walk along the shore of Loch Lomond was fantastic with amazing views of the snowy peaks opposite. I sat and watched a float plane land on the loch and sat a few times admiring the view. 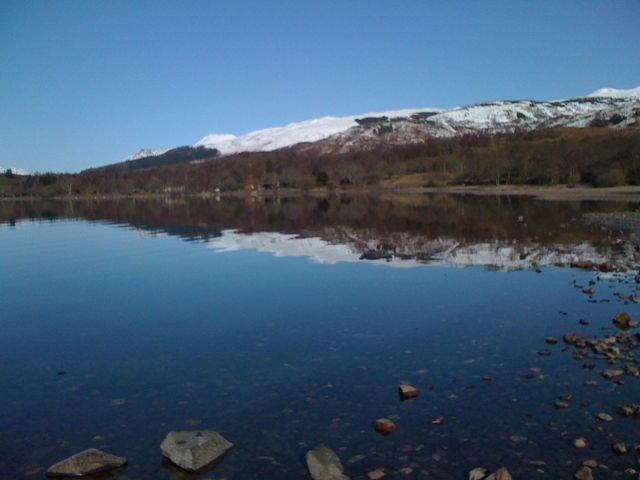 I only had a short distance to walk, with making up several miles yesterday. It was just as well really, the last couple of miles seemed quite hard. I can only put this down to not really eating since 2pm the day before other than the cereal bar.

I reached Rowardennan Hotel at 1:30, only to find the bar closed for renovation. NO, I was hungry. I stood there deciding what to do and noticed a board stuck to the wall pointing around the corner pointing to the main hotel. A woman beckoned me in and was happy to find a small cosy bar with a log fire. A pint and a burger soon disappeared.

I got talking to a couple from Glasgow about various walks. They sang the praises of the Bridge of Orchy hotel I'm staying at on Thursday. I asked how much it would be for a room, a guy appeared asking what my budget was. I ended up with a room for £39 with breakfast, normally £79.99. 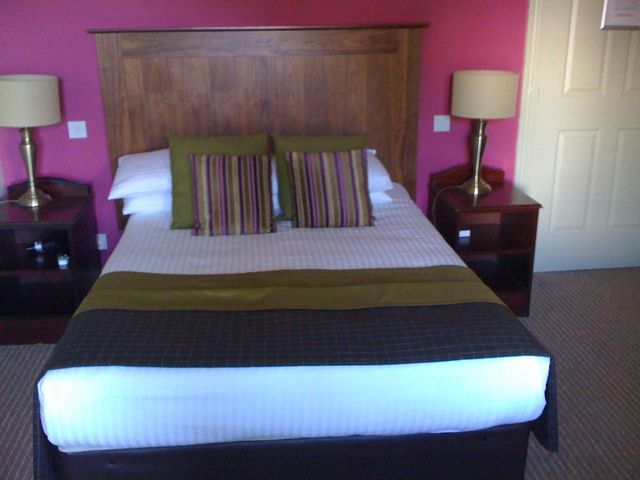 The room was far better than I expected with a great view of the loch. 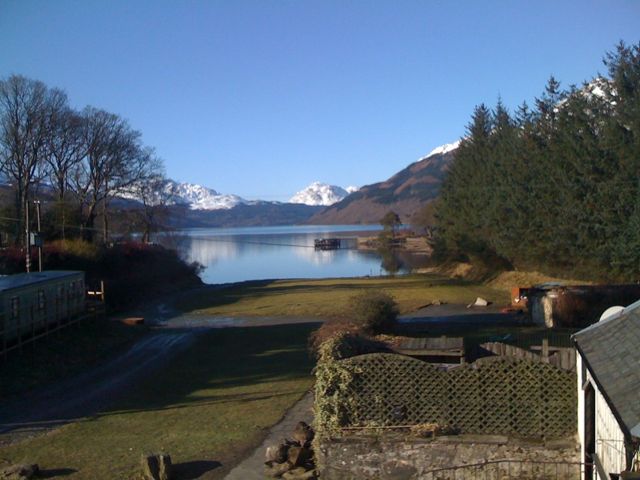 Tomorrow originally was planned to be 15 miles and include Ben Lomond. I decided against Ben Lomond before setting out from home and left the ice axe and crampons after the various avalanches. I'm kind of regretting that now, after peering up at it for ages.

So tomorrow is either a 7.5 mile walk to the boathouse just after inversnaid for a wildcamp or I continue on to Beinglas farm. Without checking the map I think it's about 14 miles and has a bar, the Drovers Inn is close too. Let's see how I get on...

This is the second time I've wrote this after Wordpress on the iPhone lost it!