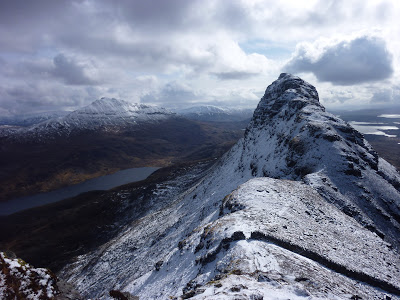 I decided a few weeks ago that over the easter weekend would be a good time to head further north into Scotland. I hadn't decided exactly where I wanted to go, but one mountain shouted out to me over anything else "SUILVEN". Twice last year I drove up through Sutherland and stared in awe of probably the most beautiful mountain in the UK? 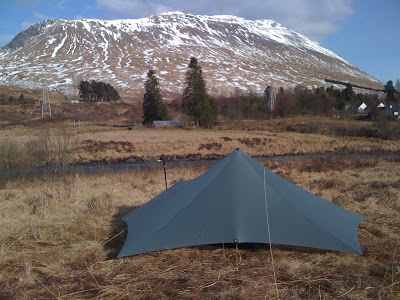 Even though in the back of my head this is where I wanted to go, I didn't want to say this in case the weather had other ideas. On Friday I headed to Scotland and after a tweet from the Bridge Of Orchy hotel I decided to call in. The special deal I got a month ago of a double room for £40 was over, the price now £110. Wildcamp it was then, this gave me a chance to try the new Trailstar. This worked perfecly but other things did not, which I will post about in a day or 2.

The aim had been to walk Beinn Dorain on Saturday, but the rain and the low cloud changed this plan. I decided instead to have a slow drive north through Fort William and on up to Ullapool, with the hope of Suilven Sunday when the forecast was for sun & cloud. 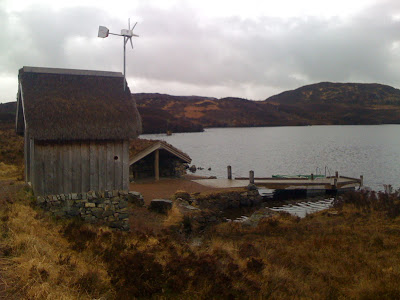 I ended up a few miles from Lochinver in a small car park, where I decided I would sleep in the car for the night. A short walk from the car park was a strange toilet with wind turbine on the shore of a small loch, there was also a shelter which I considered sleeping in.

After a surprisingly good nights sleep, I headed along the narrow road from Lochinver towards Glancanisp Lodge where the walk to Suilven would begin. There were 2 cars in the small parking area, with 1 guy setting off to walk in the same direction as me. 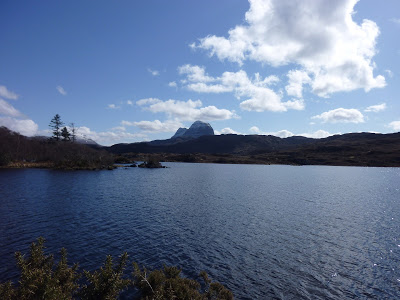 Glancanisp Lodge is having a lot of work carried out on it and was more of a building site, but once this is negotiated there is only 1 thing you can't take your eyes off (Suilven). There is a walk of about 4.5 miles along an old shooters track, this is easy going and would be fairly boring if it wasn't for the magnificent sight of Suilven. The miles just disappeared though, hardly noticing them. While I was busy staring, I decided I better check my location and noticed I was almost at the point where I needed to leave the track. Ahead of me there was a small stone cairn confirming that this was the place to start heading across the boggy moorland. 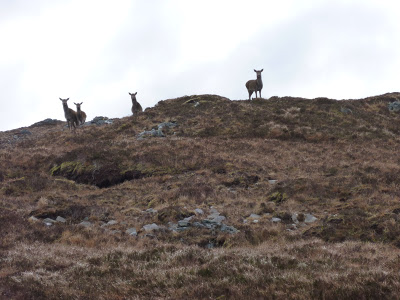 I negotiated my way around most of the boggiest parts, at one point having to do the long jump including tucking knees into chest and leaning forward when I realised I was going to fall short (made it). This is where poles come into their own using them like a pole vault. While I was doing this I noticed I was being watched by a heard of deer. Luckily the boggy section between the road to the foot of Suilven is less than a mile.

I had lost sight of the person who had been ahead of me from the car park but had noticed someone catching me up (later realising it was the same person). I stopped at the bottom of Suilven for water and a bite to eat, as polysterene hail came down. This appeared to be caused by the cloud hitting the top of Suilven and dropping its contents on me below. As I put a jacket on, the guy who had been behind me caught me up and we got chatting. His name was Ermanno an Italian living in Glasgow, he asked if I wanted to walk up together. Sounded like a good idea, he put on a climbing helmet and explained he had a couple of bad experiences of rocks falling. This was probably a good idea walking with me anyway! 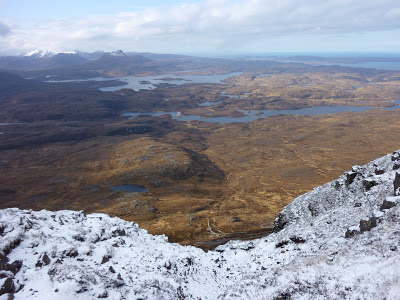 The route up "Coire Dubh" is quite steep and looking up you think umm is this a good idea, especially with the snow further up. I followed Ermanno and we made rapid progress up to the Bealach where when he reached the top let out a woop. I followed a few seconds later and could see why, the view was spectacular. After a few photos we headed along the summit ridge to the top "Caisteal Liath", there were a few narrow airy sections with gullys down to the ground below but nothing hard. There was only a small amount of clambering up snowy rocks to reach the top. 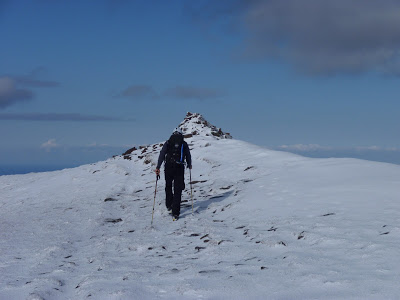 The summit is a large grassy dome or it would be if it wasn't covered with 6 inches of snow, making it all the more beautiful. Your eyes don't know where to look first, in every direction there is something that makes your jaw drop and brings a smile to your face. Whether it be the view towards Lewis & Harris across the sea, Quinag, Canisp, Stac Polliadh, Cul Mor or the moors and tiny lochs beneath you, they're all a feast for your eyes. 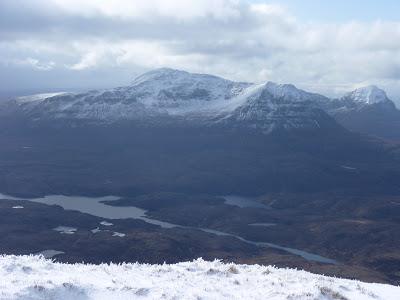 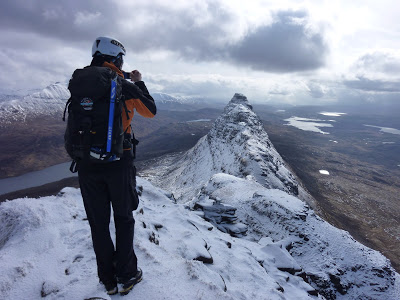 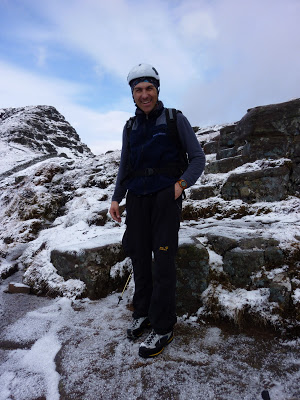 We spent about 30 minutes up there taking pictures, eating fruit salad or in my case a Wispa before finally deciding to head reluctantly back down. Amazingly to us both, we were the only people up there and had seen no sign of anyone else other than a tent as I left the shooters track. 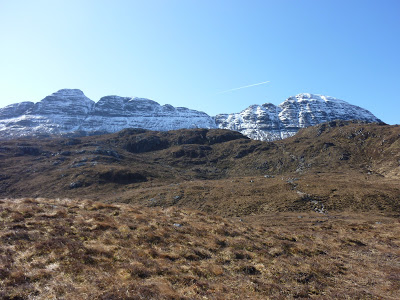 Once again I followed Ermanno on our descent, he made fast work of the descent which was a little more tricky for me in my Inov-8 Terrocs, they still kept me upright along with the pacer poles. I'm sure we were almost running down at one point. As we reached the bottom we noticed several people approaching us and stopped to talk, most were surprised we had already been up and back down. I felt at one point that I had to reassure 1 guy who explained it was the first time he had done anything like this, it looked like he was being dragged up by mates.

I watched Ermanno jump over the bogs Gazelle like, while I jumped slightly less elegantly. I'm not sure how long it was from the top to rejoining the shooters track but it was quick. The walk back along the track didn't pass quite so quickly, this is often the part I hate on a walk. The track goes on forever and with Suilven now behind us, it wasn't there to distract from the path. We passed several more groups of people, including 3 people cycling which would definitely be a good way to get along the track.

Once back at the cars, just after 2pm, we exchanged email addresses and agreed to keep in touch. Although Ermanno is moving to Vancouver in July (lucky bugger). Experiencing the ascent and especially the summit was made all the more special for sharing it with someone else, thank you!

No picture or video can do this place justice, make a date with Suilven and go experience it for yourself...