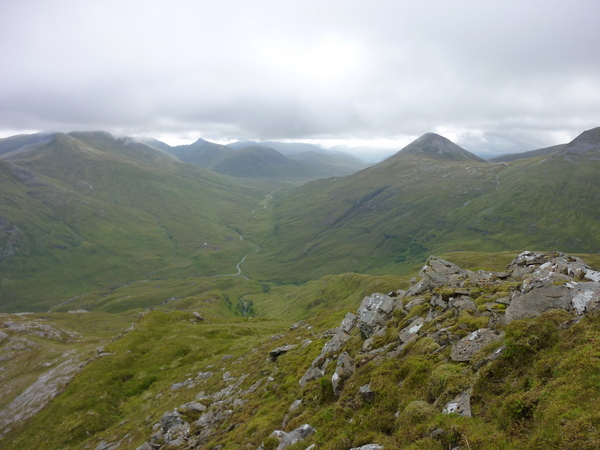 The Ring of Steall from the name alone has got to be fantastic and very likely hard. Discovering the walk a couple of years ago, it has remained on my To Do list ever since.

My "Attack of the Wainwrights" walk was cancelled due to a dodgy roof, so it left me with several days of holiday and a vision of Scotland. I'd intended to do this walk immediately after the planned Wainwright walk, but half expected it not to happen after 7 days of walking. I now had no excuse. 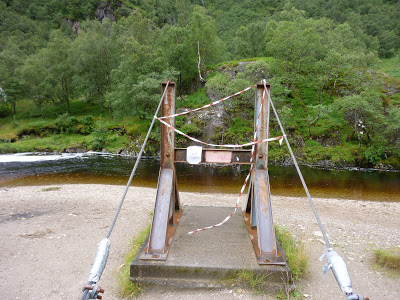 After walking Ben Lomond, the Ring of Steall was next on the list. I decided to do a reconnaissance mission and check out the wire bridge, which I'd heard was down. The bridge was indeed closed and people were working on it, but it was clear it wasn't going to be finished in time for my walk the following day (it is now fixed and open).

I set off shortly after 7am, parking the car in a layby not far after the road crosses Water of Nevis. This isabout a mile from the car park at the very end of the road. I decided I'd rather walk the mile at the start of the day, not the end. There was no sign of anyone, which was very different to the day before when there was a steady stream of people heading towards the falls. 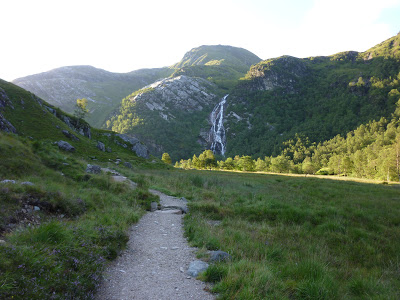 The day started with brilliant sunshine and blue sky above me, but clouds could be seen shrouding the higher hills. I walked past the wire bridge which still had closed notices and tape around it. A few hundred yards further up there is a shallow section of water where I could easily cross. I was actually saddened when I realised just how shallow this was, I was hoping to rekindle memories of river crossing from the TGO, this was rather pathetic by comparison. 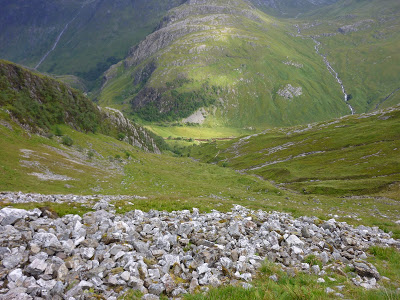 I headed to the falls themselves to take a look, while no one was around. They make High Force near where I live look quite small (although more water at High Force). After being attacked by midge I decided to not linger and start the climb up Chadha Chaoruinn. The path was steep and height was gained very quickly, it wasn't somewhere I got much chance to stop. The few seconds I stopped to take pictures, I was descended on by midge. The views below of the valley bathed in sunlight and across towards the CMD arete which was also on my list. 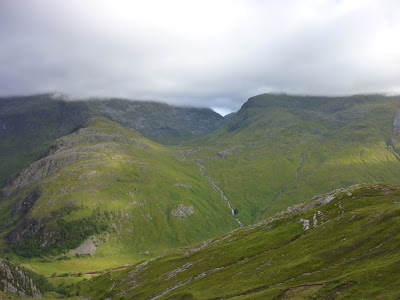 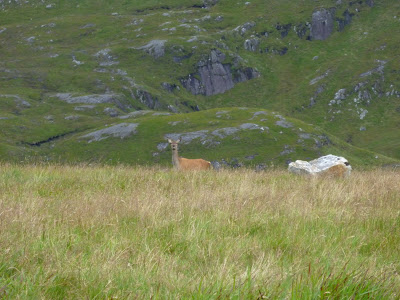 I eventually reached a grassy flat area where I could catch my breath, after the previous 30 minutes of furious ascent. While I was stood having a drink I saw something move in the long grass, a deer suddenly stuck its head up, stared at me before running off further into the bowl created by the Ring of Steall. I managed to take a very quick picture. 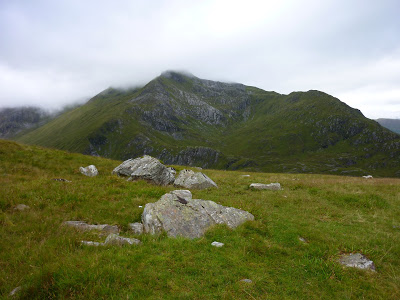 The cloud had become thicker, there was now a ceiling that prevented me from seeing the tops of the mountains. Sgurr a' Mhaim the last of the day and the highest was still almost completely visible, but not for long. 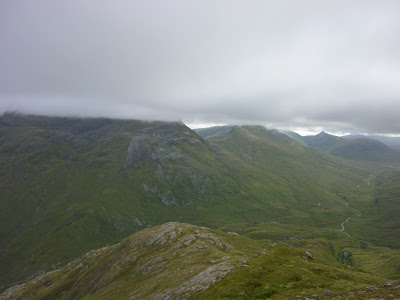 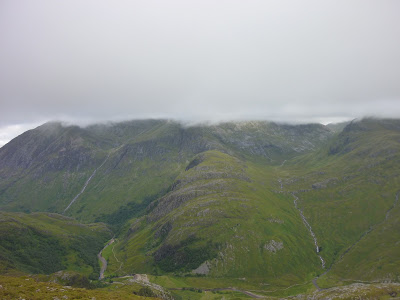 There was nothing to do but continue on and upwards to the first Munro of the day, An Gearanach. Clambering up here, I couldn't help but constantly stop and take in the simply stunning scenery in every direction. To the North, the cloud capped Ben Nevis, North East the Grey Corries and directly to my East & West more of the Mamores. Before I had reached the top of the first mountain I'd made my mind up to return to the Mamores and hopefully incorporate into a future TGO Challenge route. 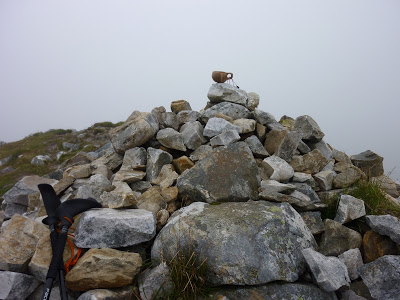 When I reached the top of An Gearanach I was in cloud and other than the summit cairn, which proudly now displayed my Kuksa, I couldn't see anything. I knew that in every direction on a clear day, there were view that would leave my mouth agape and I would be drooling to walk each and every mountain I could see. Maybe it was good then that I could see bugger all.

To be honest even in this weather, you couldn't go too far wrong, there are clear paths over these mountains. The only problems posed are where several paths join and due to the cloud you can't quite tell which is which. The compass or a GPS soon solves that problem, at times the compass can be easier if your GPS has no digital compass. 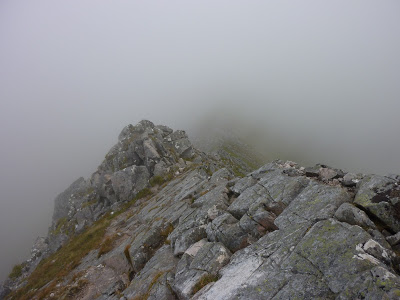 The next target was An Garbhanach which is only slightly lower than the previous Munro and I guess a subsidiary top. I did a little bit of scrambling up the ridge to the top, which could of been avoided but I wanted some fun (maybe not the best idea alone). I had my fun totally without incident, this felt more of an achievement than the previous. 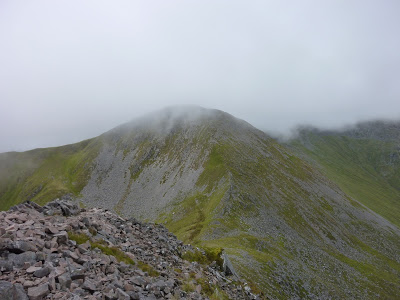 While descending to the Bealach the clouds permitted me a brief glimpse of the next target of the day, the Munro "Stob Coire a' Chairn". Sadly the clouds didn't feel like releasing their grip on Am Bodach for my viewing pleasure. Binnein Mor and especially Binnein Beag captivated my imagination for future trips. 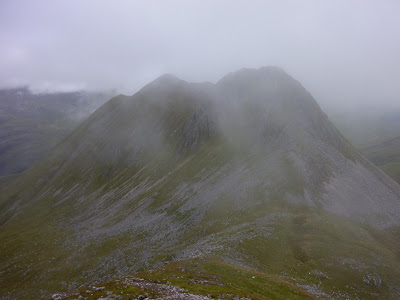 Stob Coire a' Chair disappeared again in the cloud while I ascended, which can often be a good thing when there's lots of it. I was rewarded with more glimpses of of the hills I had just bagged through thinner cloud. I found myself on the top of the next Munro, thinking am I here already. Kuksa summit pictures were quickly taken as has become a custom for me now. The obvious path from the top leads to the East, which is the wrong direction for RoS. Happily I chose the correct path. 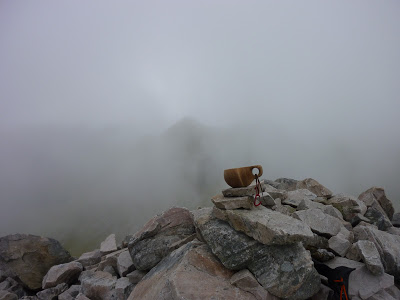 The descent from Stob Coire a' Chair felt quite substantial, in reality it was around 500 feet. This brought me beneath Am Bodach, which I could see absolutely nothing off. The clouds had an even tighter vice like grip of the mountain. Visibility was at the lowest of the walk, this really was probably a good thing, the route up is steep and isn't marked on the map. There is an obvious path on the ground though, but you could find yourself thinking am I supposed to go up there, especially with low visibility. 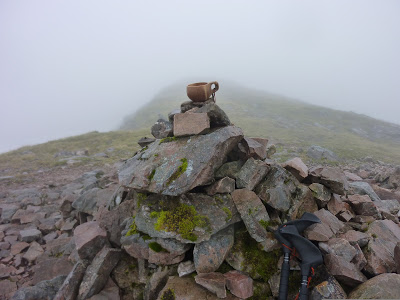 I find when I can't see anything I tend to walk even faster than normal, probably because I don't stop, there is no reason too. So even steep ascents are dispatched quicker than they otherwise would, this was the case with Am Bodach. I found myself alone on the summit, looking at a grey wall of cloud. This was to be my view while I ate my lunch, hoping the cloud would thin if not lift. Sadly it hadn't read my script and it held on to Am Bodach. While I sat there chomping on a sausage roll in the damp, I heard something and a man appeared from the direction I would he heading. We had a short conversation, he thought he would have a view when he set off. I continued to eat my lunch as he sat down 20 feet away to do the same.

I had lingered hoping for the briefest of glimpses of the mountains around me, but decided it wasn't somewhere I wanted to hang around, it was cold and damp. The descent while not as steep as my ascent was a lot more rocky and I was careful not to slip on the damp rocks. It felt like I was descending then walking along a flat ridge forever. On a different day, I can only imagine the views would be mind blowing, well I imagine they are. Even though I couldn't see anything, I was still enjoying the walk. The solitude cloud and fog can bring is hard to describe, it can be frightening too many, but I find it strangely inviting. I had only seen the one person in nearly 5 hours of walking. 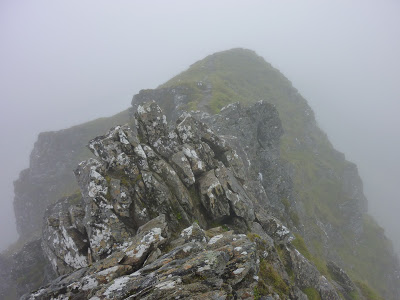 I knew by now I should be on the devils ridge, which I hadn't read much about really. I knew it supposedly had quite a drop each side, but I couldn't see anything put the path in front of me. I then reached an obstacle, a large group of rocks that were very wet and slippery and looked quite formidable. I could see that there was quite a drop either side. I started to put my poles away, ready to clamber over the rock when I noticed a path just below and to the side of them. This would be very obvious in better weather but I couldn't see that far initially. As I walked below, I could see that it would been quite hairy to of crossed where I was about to. I thought I'd taken a picture from the side but I hadn't and I haven't found one online. 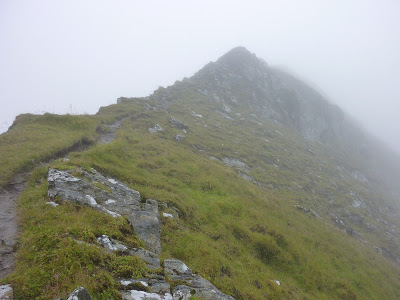 Once safely around using the obvious path (once you are on it) I walked a few hundred yards before meeting the second and final person of th day (until the valley floor). Again we had a short conversation before continuing, it wasn't the weather to be gossiping. Most of this section is a bit of a blur now, until I started to ascend up to Sgurr a' Mhaim which was the last Munro of the ring. 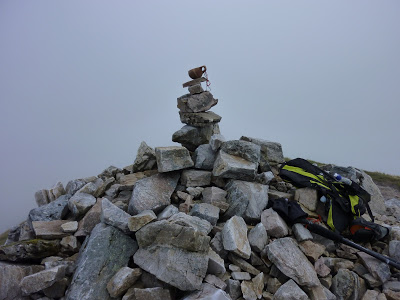 When I reached the large summit cairn on Sgurr a' Mhaim the cloud started to thin, allowing for a few glimpses back along the Devils ridge and the valley below. I sat at the cairn for quite some time, balancing my Kuksa on the tower of rocks. Sadly I still wasn't permitted a view of the full ring I'd walked. 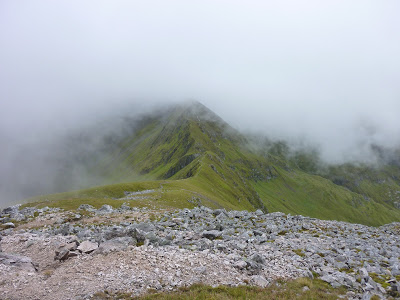 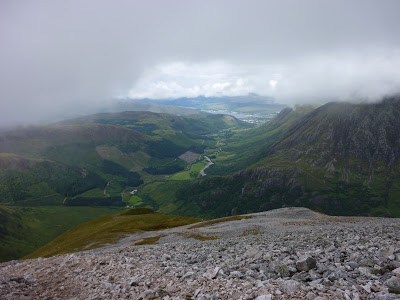 Eventually, I reluctantly started the very long descent to the valley below. When I say long, I mean long, it felt like it was taking longer than the whole rest of the route. This wasn't the case and luckily the cloud became thinner and the views superb, but as the scree ended and long grassy banks took over I began wishing I was either back on the tops or finished and at the car. I would certainly not want to walk up this way, it would be one relentless pull, it would be as bad if not worse than the tourist route up Ben Nevis, likely worse. 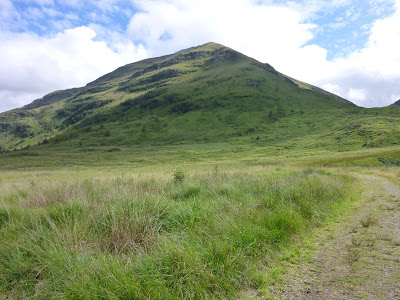 I did eventually reach the valley floor, joining back onto the road at the bridge that crosses Water of Nevis with lots of people enjoying the sunshine at the small falls. Yeah there was sunshine down here, I turned and looked back and all of the cloud had lifted from the mountains, typical. I only had a few hundred yards to walk back to the car. Even with the poor visibility I had loved the walk and would recommend it to any fit walker. I will return, when hopefully I can enjoy the views.

You can find the route and more details on the Walk Highlands Page.