Lots of outdoors bloggers have been featuring guest posts over the last year. I thought it would be a good idea to ask Traci (my other half) to write about her first real year walking in the outdoors. It's all totally new to her...over to Traci. 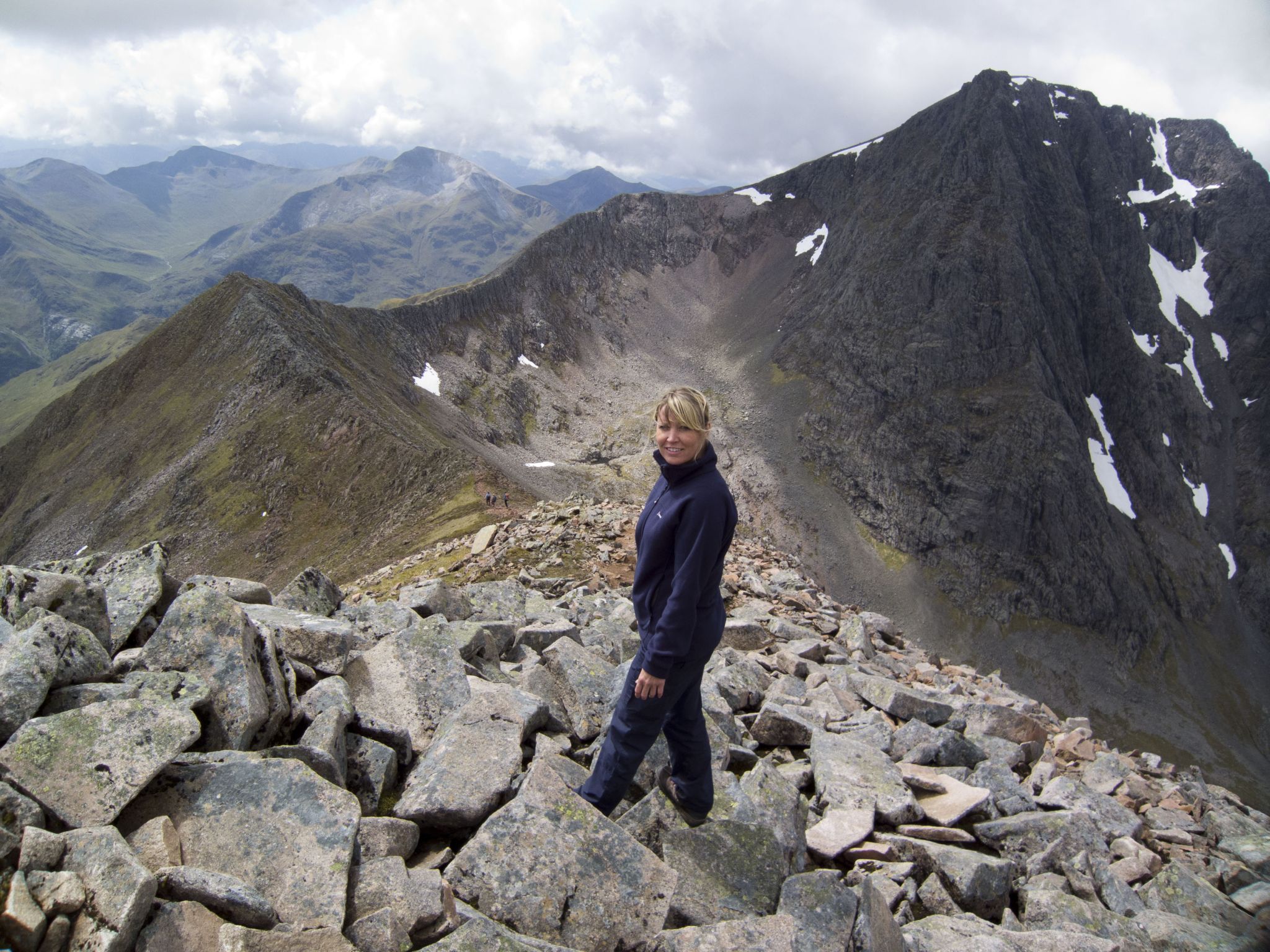 Up until April 2011 Saturdays and Sundays were spent in the local getting drunk and having hangovers for work on a Monday. 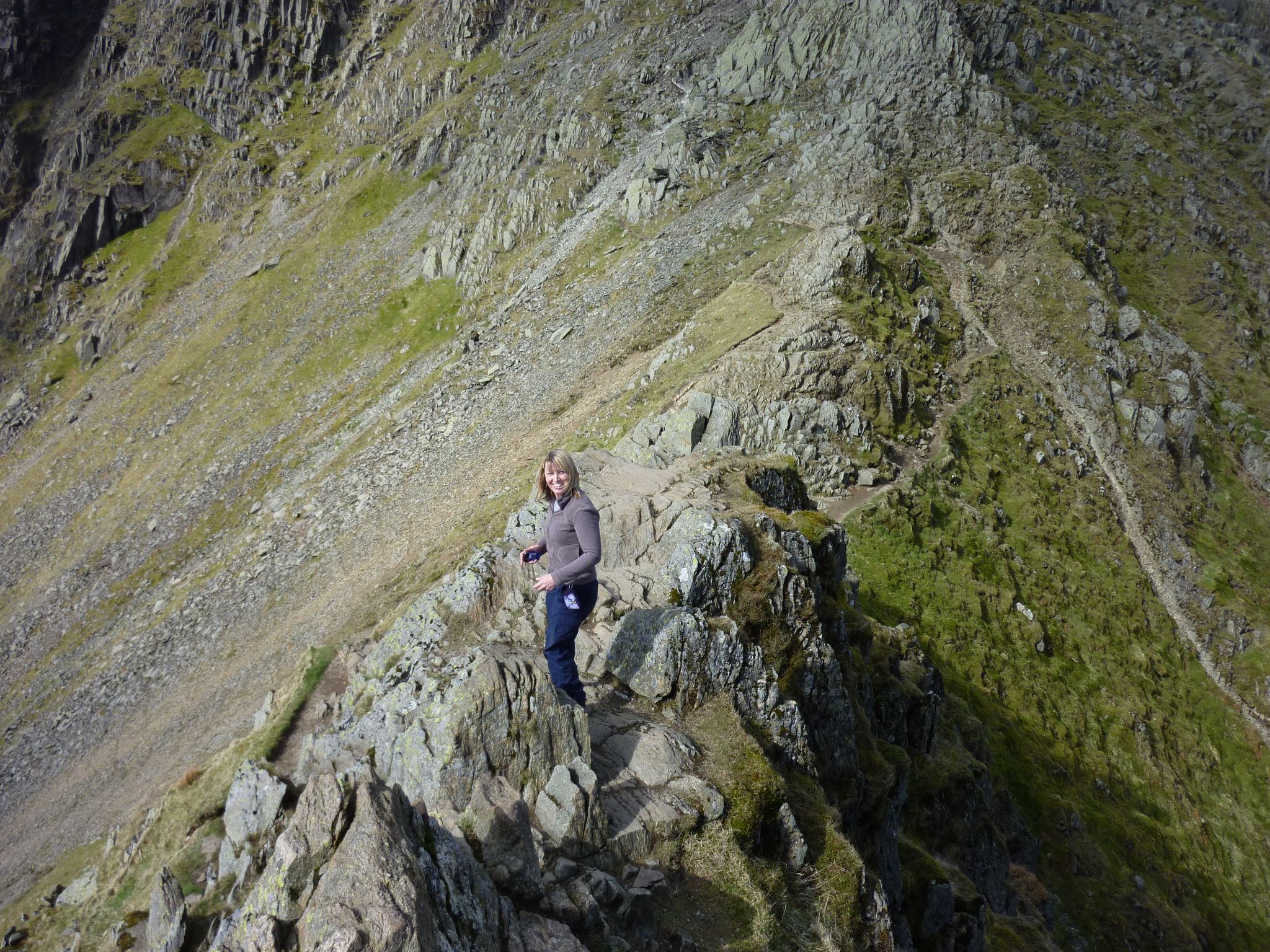 After meeting Steven in the February things started to gradually change. After my first walk in March to the Elephant trees in Weardale with him, then trying to take two of my kids on the same walk a few weeks later and getting lost in torrential rain. Luckily Steven was following to get us on the right track. I then went with him and walked up the Langdales Pikes (how sad, not knowing there would be water on the path haha). Then Striding Edge which I couldn't understand why people were walking along the side instead of the ridge, which is all part of the fun. Coming down Catstye Cam we were skidding down a steep bank of scree, watched by a couple, bet they thought we were mad. 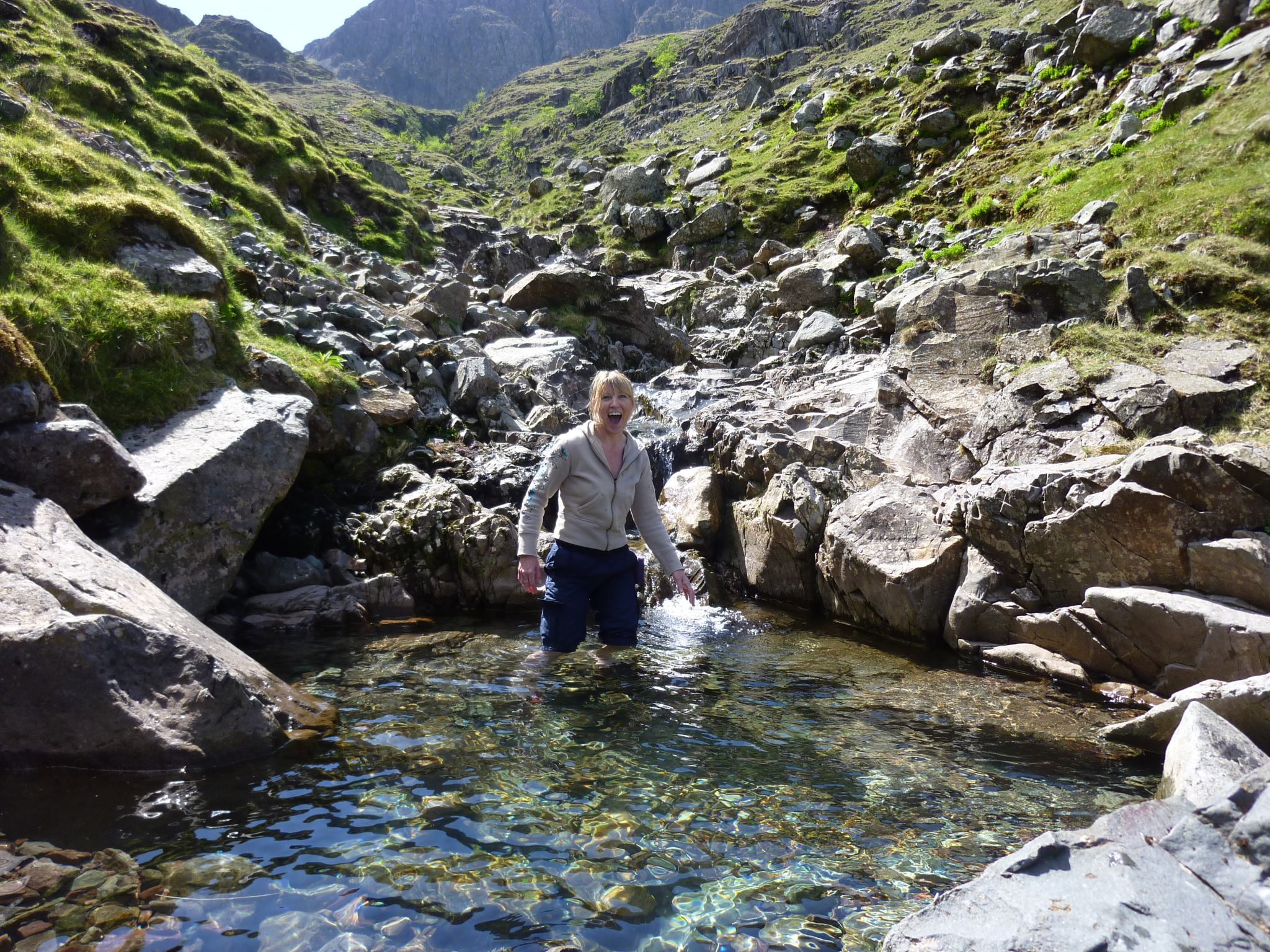 Glaramara and Allen crags were next, after walking up a steep bank to a gate then sitting down to take my jacket off because I was hot, there was an awful smell. Steven said it was me, yeah right. After sitting for a few minutes resting we looked down at our feet and there was a dead sheep hence the smell haha blind as bats. As we got further up Steven decided he was going to run to the top of another small mountain no way was I, so I waited sheltering from the wind, which was blustery on the top. Coming down we ran, Steven had his buff on his head. He looked exactly like the roadrunner haha. To cool off we paddled in deep pools, where Steven got a drink in his kuksa from a waterfall.

After walking in the lakes, Steven took me to Scotland camping for his birthday in June. Ben Nevis and the CMD arete was my next challenge. We walked a different way to everyone else wading through heather and been attacked by millions of flies it was a hot day, so really hard going. I didnt have the energy to talk, which probably pleased Steven. As we started climbing up to Cairn Mor Dearg there was an old woman, I was really impressed she had got that far, I was really tired by then and had to climb up to Ben Nevis after that. The CMD arete was great to climb, loved every minute of it, although it was hard work i dont know where the CMD arete ended and Ben Nevis began. I just know climbing the last bit to Ben Nevis was really steep and cloud started covering everything behind us, was quiet eeiry (save yourself i shouted to him haha) not long after we reached the top we had a rest and something to eat before setting off to walk back down the tourist route. It's a strange mountain, red hot walking up, got a bit sunburn on my neck, really cold and windy on the top, then not long after we set off to walk back down there was a large patch of snow. Pleased we didn't walk up that way though, it was quite boring. 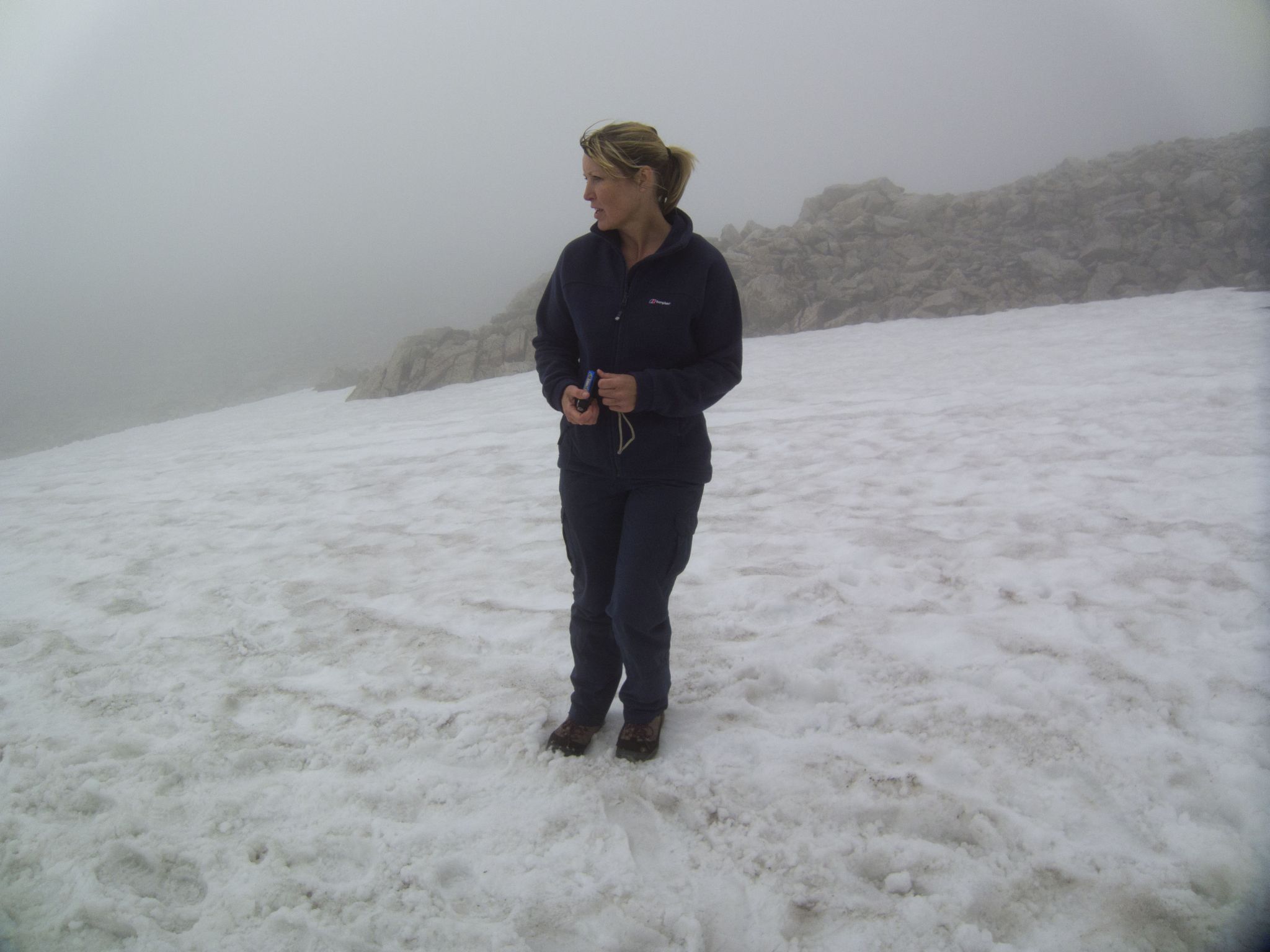 July and Scafell Pike the highest mountain in England, lots of people about and Stevens fall haha (not funny Traci). Not a very memorable mountain apart from the fall, we walked to the top, remember my knees hurting on the way down and an ignorant group of foreign young people who had their packs blocking the path on the way down so it was hard to get round, thats when Steven wobbled on a boulder and fell off, god my sides were aching with laughing he hurt his knee in the process, think he got a bit sick of me as I laughed all the way back to the car. 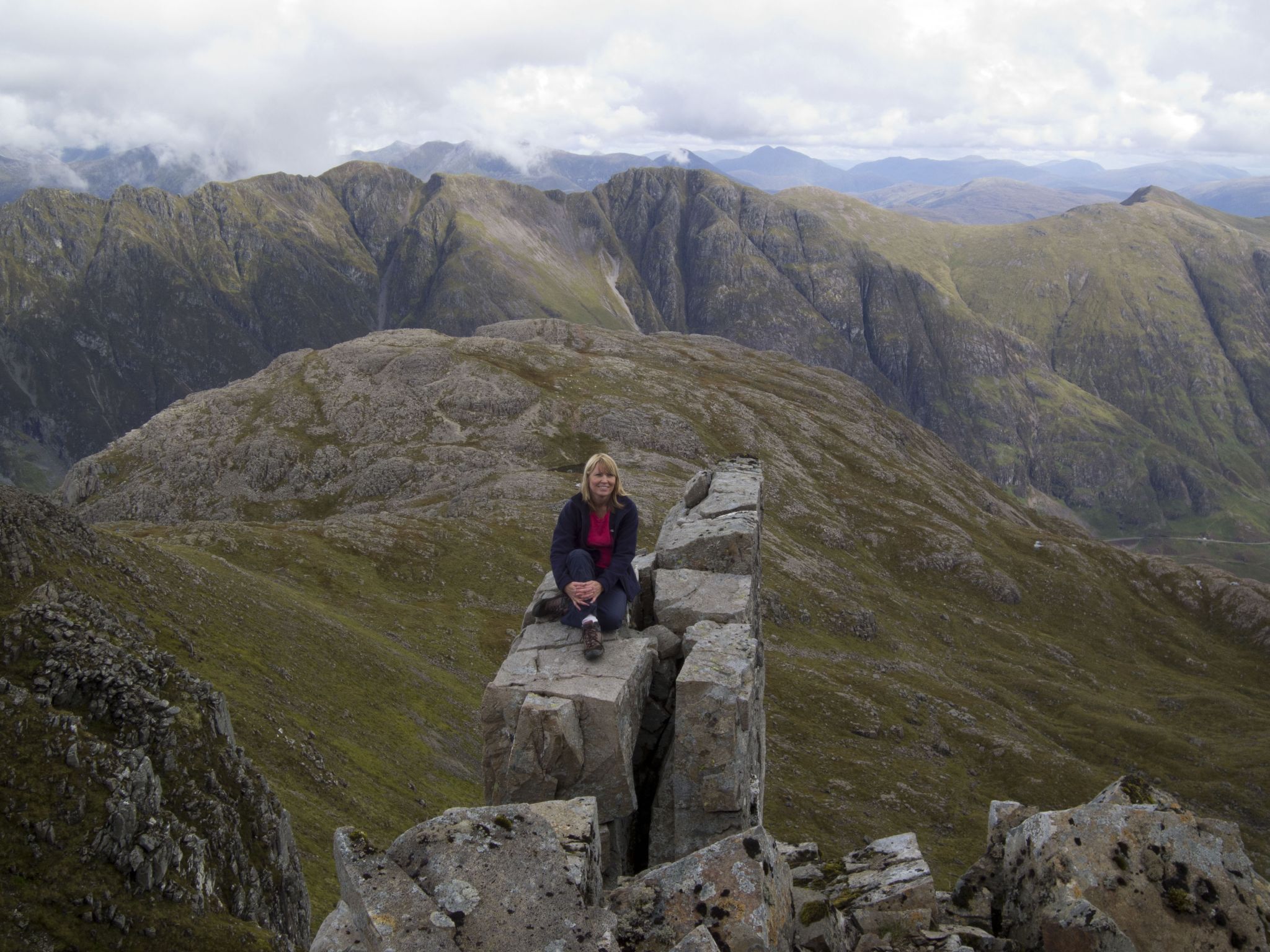 Bidean nam Bian September, I find the first part of climbing a mountain is the hardest. I get out of breath very quickly, on this day there was a man with short arms climbing in front of us. I kept thinking how strong he was, he wasn't even out of breath and here I was stopping for a rest constantly. I thought it was hard, which i like. There was a ledge sticking out which we climbed onto for photos. After reaching the top we decided while we were there it would be stupid not to climb up Stob Coire Sgreamhach. On the way down there is a kind of scramble drop, if that makes sense, we had to wait till a couple climbed up before we could go down. The lost Valley was like a place out of the Land that time forgot. I remember my knees were really hurting walking back to the car and the last bit felt like it was never going to end, that's the worst my knees have felt. As we got back to the car there were bus loads of holiday makers getting ther photos taken with the Three Sisters behind them. 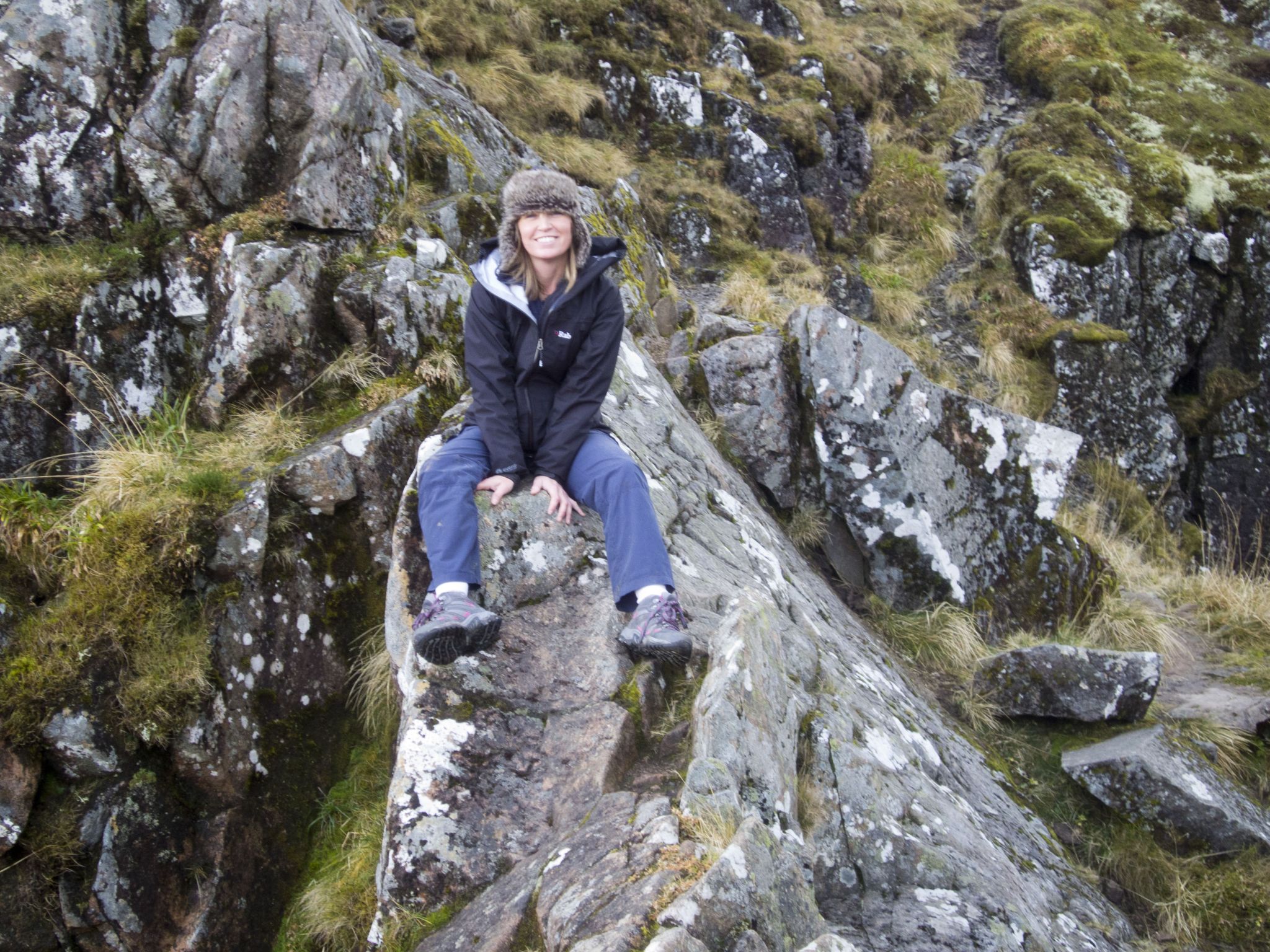 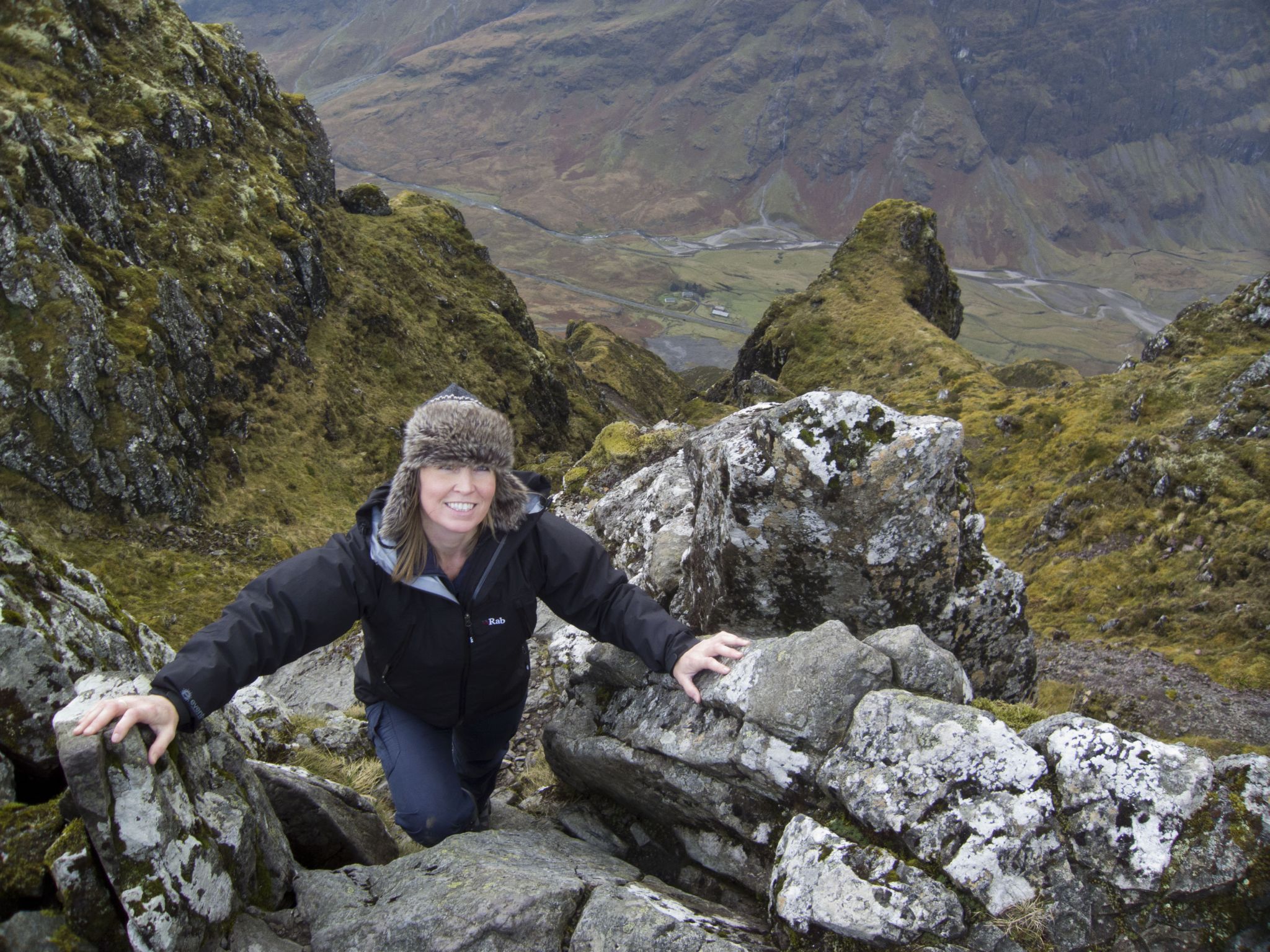 Aonagh Eagach November, my all time favourite. Windy when we set off, coat on then off all the way to the top. Scrambling over the tops we only passed three people and saw a couple in the distance. A really hard scramble I thought and after climbing down the side of one part, I think Steven was trying to finish me off, a nearly fell off. Spinning round and looking down at a drop I thought this is it, then Steven climbed back down and pushed me back into the mountain. I was still stuck, it was slippy underfoot and i thought if i take my foot out of here I am still going to fall, the rock was really muddy and I remember saying my £160 coat is gonna be covered in muck, and my nose is running. What a stupid thing to think about, while my arms were wrapped round a rock, but as you can tell I made it back to the top. After having lunch we set off on the rest of the scramble. Darkness was setting in and we still had to decide which way to climb down, I wasn't bothered whichever was the quickest, Steven decided we would try Clachaig gulley. "I can see the pub from here", what a long way down. I was annoying Steven sliding, getting my feet stuck on rocks and him having to catch me and laughing at nothing in particular, "I can still see the pub from here". I was getting bored and the end wasn't getting any nearer, it felt like hours before we reached the bottom and it was dark. Hallelujah, nice pint of cider in the pub, before setting off and walking three miles with head torches in torrential rain and pitch blackness back to the car.

End of 2011 and start of 2012 on top of Killhope Law with Steven in the freezing cold with a small bottle of whisky, seeing in the New Year. My weekend binges in the local are no more, found two things I enjoy doing more 1) Spending time with Steven 2) Walking up Mountains.

Looking forward to this year, I am going to run the Deerstalker race in March in fancy dress which should be a laugh. I will be like a pig in mud, getting used to being dirty, makes a refreshing change from dresses and high heels.

My first wild camp in April on Skye, don't know what to expect. I've only camped on a campsite with showers and lights. Told Steven I am taking my foundation and mascara which he says I dont need (but I do ), don't want to scare the wildlife haha. Hopefully more climbing mountains and reaching a higher level than Steven and Jonathan rock climbing ( thats a joke ). I will never be better than them. Followed by a summer holiday, somewhere hot with a small mountain in maybe ; ) of course there will be a mountain in it haha.