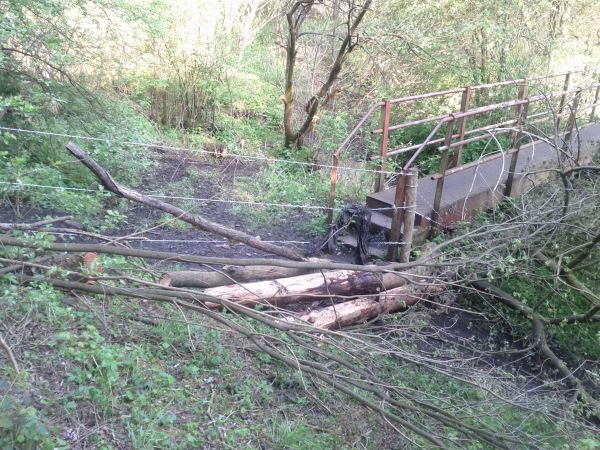 Something is stirring in many small villages and towns throughout England & Wales. In normally quiet villages, people are angrily discussing the latest happenings in the woods and fields around them. People who normally keep themselves to themselves are beginning to stand up and share their voice. So what's causing these normally quiet villagers to break their silence?

In a word "Access" or Public Rights of Way (PROW), in England & Wales there are around 140,000 miles of off-road routes that are classed as Public Rights of Way (PROW), that's over 5.5 times around the earth. These are shown on Ordnance Survey Explorer maps in green and Landranger maps in red. To be classified as a PROW a route needs to appear on the "Definitive maps" held by the local authorities. This then means that you legally have a right to use the route and the landowner should not obstruct or divert it (see Ramblers page for more information). So why are people becoming angry if they have 140,000 miles of paths to walk. In 2000 the government introduced The Countryside and Rights of Way Act which contained a cut-off date of 1 January 2026 for rights of way not on definitive maps. After this date those paths will be lost to public use. There have been estimates that up to half the walked paths in England & Wales are not recorded. You could find a path that has been walked for generations suddenly lost. 2026 may sound a long way off but add to the fact that almost all local authorities have a backlog of years to add these paths. According to Grough, Staffordshire County Council has a 17 year backlog which is set to get worse. Suddenly 2026 isn't so far away.

Most of us, myself included don't pay too much attention to reports like these until we feel the effects ourselves. Then suddenly there's a wake up call, in my case paths I have walked since I first put one foot in front of the other are suddenly barbed wired across and blocked off. I live in a small village in County Durham called Roddymoor, to the South of the village there are woods known as "Kitty's Wood", which previously was the site of mining and a coke works. These were landscaped over in the late 1960's and the wood was planted and footpaths put in. 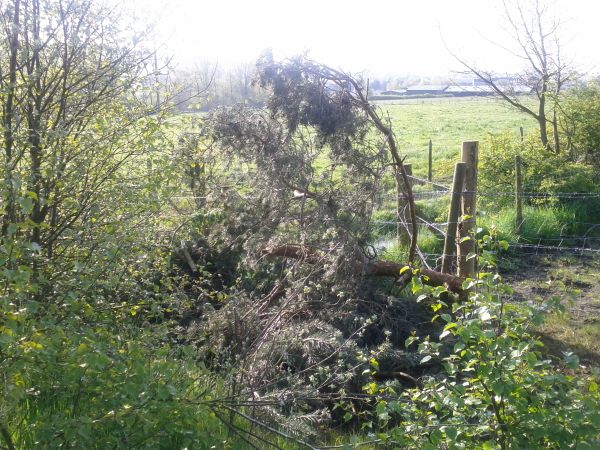 The land was owned by Durham County Council and leased as Roddymoor Farm and the paths were maintained by the Farm and the Council. Locals from Roddymoor, Crook, Billy Row and the surrounding area walked these paths for decades with no problems. The farm closed a few years ago and the Council took back management of the land, who in these budget cutting times decided to sell the land. The land was put up for auction in 2012 and eventually the land was sold to a few buyers, Kitty's Woods included. Shortly after this problems started arising. 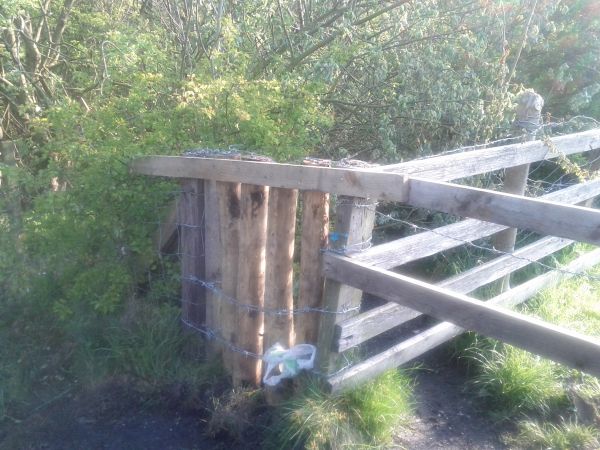 Paths were suddenly blocked with barbed wire and felled trees, walkers became angry and contacted the Council. They were told the paths were not PROW and did not appear on the "Definitive Map", the new landowner was perfectly in his rights to close the paths they had. This will be the first time most will of heard of PROW, Definitive maps, etc. now what do they do. There are still some official PROW through the wood but less than half of the ones people have walked for over 40 years.

I will stress here the new landowner has done nothing wrong, the paths which are on the Definitive maps are open. The Council also can't do anything now about these paths, unless they are added to the "Definitive map". The annoying thing to many who have walked these, is that the Council did maintain them, owned the land and never prevented anyone. They could have and should have added the paths as PROW years ago but we can only deal with the present situation.

So what can you do now?

The only option open to walkers prevented access is to fill out a "Public Right of Way User Evidence Form" for each path, along with any details you can provide. For a path to be added to the "Definitive map" it needs to be have been used for over 20 years. The Council need as many people to fill these out as possible providing as many details as you can. The forms are a nightmare to complete and most would look at requests for grid references and copies of maps and give up. It has taken days to fill out the forms. To make it easier for anyone with no access to mapping or any idea how to find grid references I have provided the forms below to download for each path with the grid references completed and the map with route drawn on. You can download and draw on these, adding any details you like. These should make the process a lot quicker. If you would like a blank form click here (Impossible to find on the Council site?) 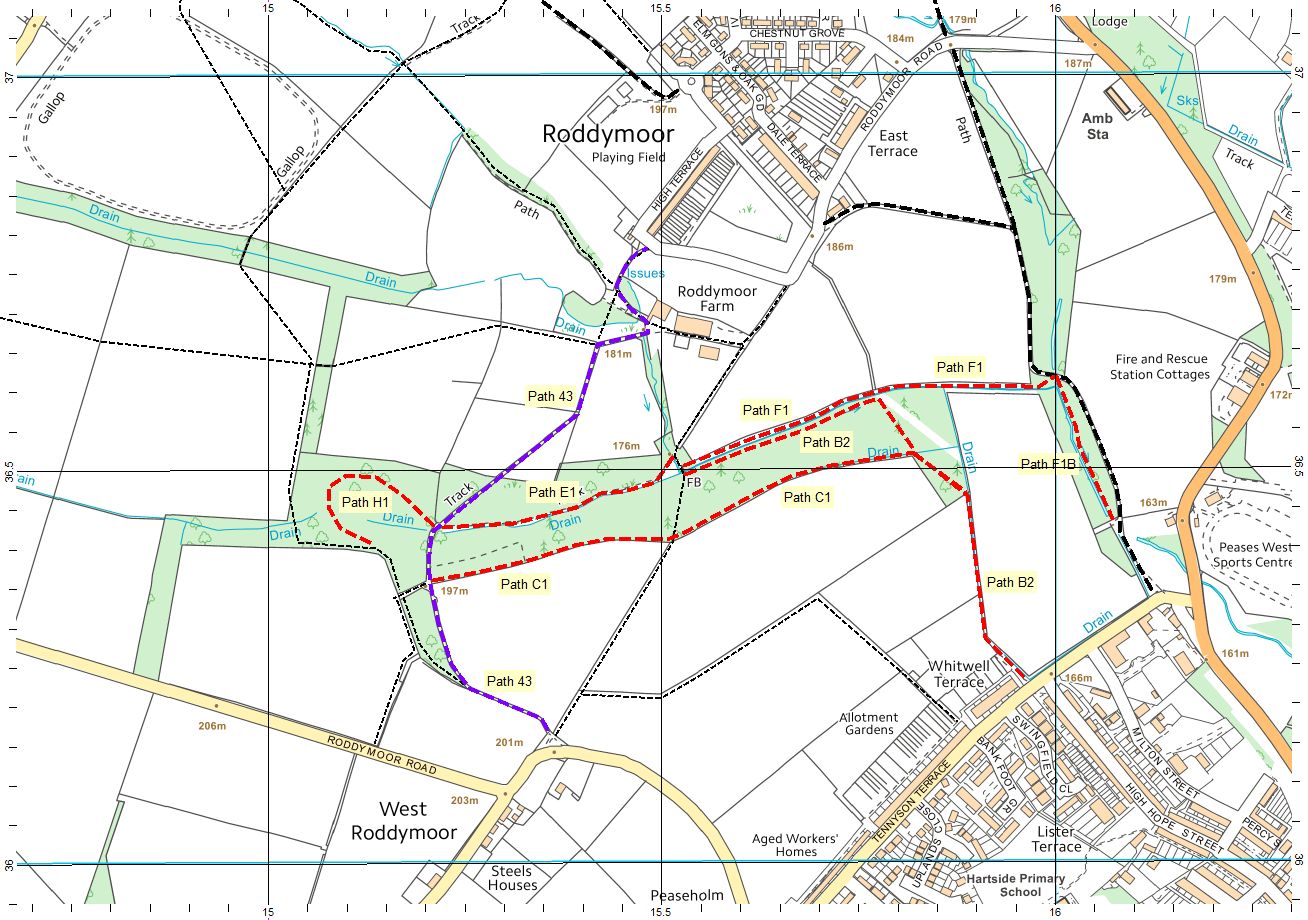 The Downloads below will hopefully be helpful and save time, the path names are made up for my use to reference them. See overview map to help identify which path is which, click the image to make it larger.