This is the first walk from the Walking the Wainwrights book, see my previous post for more details on the book. It's probably not the easiest route to start with but does give a good indication of the level of fitness needed and is generally on very obvious paths. The highlight of this route is striding edge, which is an easy undertaking in good weather for anyone who has a reasonable amount of experience but the best advice I would give is to set off early or do this route during the week where possible. Helvellyn is one of the most popular Wainwrights and if its a fine day Striding Edge can be busy.

The walk starts from Glenridding National Parks car park which currently has some of the bays taken up with supplies being used to repair the damage caused from floods earlier in the year. We paid in the car park but you could park outside the car park just along from the bus stop between October and April 1st it's free. 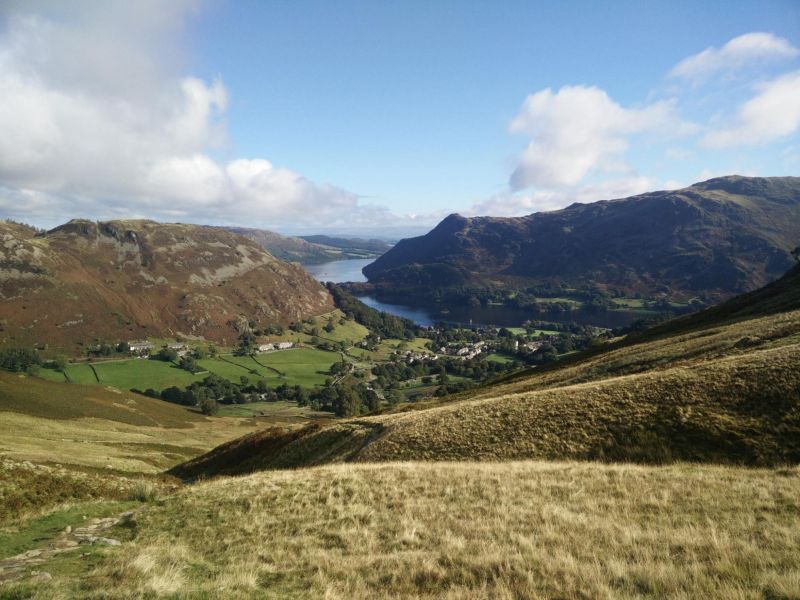 Most people never walk over the very first fell of this route and are too busy rushing towards Helvellyn and the 2 fantastic ridges leading up to it to realise if they walk a few yards off the path they will bag a Wainwright (Birkhouse Moor) and have a nice view over Ullstwater. It's a short walk from here to the hole-in-the wall stile and the start of Striding Edge. If it was very wet or windy and you were unsure about Striding Edge I would suggest Swirral Edge is slightly easier, but you do that in the next walk, it would also be a shame to miss Striding Edge out. We found ourselves queued behind people on some very easy sections where they were clearly scared of heights and didn't think to let others pass where it was possible to do so. This becomes frustrating for the more experienced walkers held up and adds pressure to those who are already struggling. 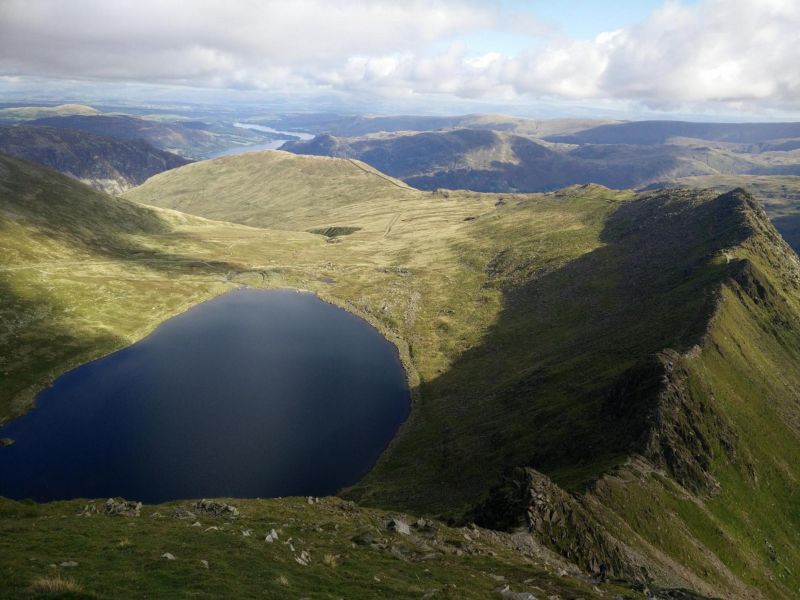 Once you've walked Striding Edge you find yourself on the big open summit of Helvellyn and very likely a mass of people. Don't forget to look back and take some pictures of Striding Edge. Make sure you do actually walk to the trig point not just the shelter or the stone cairn. Once you've bagged your second fell, retrace your steps slightly before continuing along the long easy ridge. Again be careful you don't just blindly follow the main footpath otherwise you will miss the 3rd Wainwright (Nethermost Pike). This section is quite easy you do drop slightly before heading back up to Dollywagon Pike and your 4th. 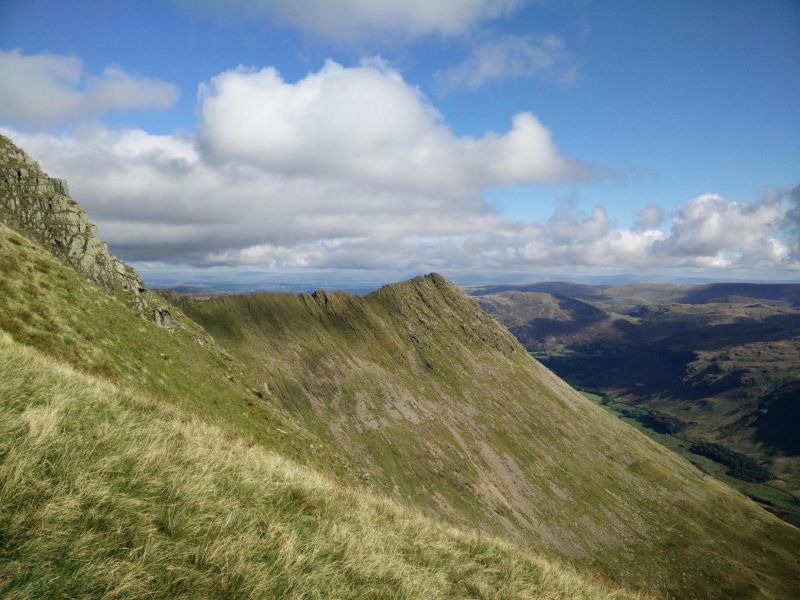 The Next Wainwright is Seat Sandal and you lose quite a lot of height down to Grisedale Tarn, we took the fellrunners route and headed direct rather than following the zig zags. From Dollywagon head in the general direction of Seat Sandal and you will see an old iron fence post. From here you can either make the decision to head direct or follow the main footpath. Beware it is a steep descent and the zig zags make the descent easier with less impact on the hill side. Once you have descended to Grisedale tarn there is a fairly obvious steep route up the North side of Seat Sandal which follows the remains of a wall. This is probably the hardest fell of the this route due to the descent and re-ascent and descent again. Head off the East side once you've bagged this.

Once you have descended to the col between Seat Sandal and the path up to Fairfield (not for today), look carefully and you will see a slightly higher path than shown in the book and avoids having to completely descend to the tarn outlet, it doesn't save much but it is easier. You merge with the path from the tarn and start a steady ascent to St Sunday Crag, it does become a lot steeper higher up and in places there are several paths. Eventually you join onto the path between St Sunday Crag and Fairfield. From here its quite a simple walk but you can't see the summit and it's one of those hills where you keep thinking you are there, only to find it's a bit further. Once you do make it to the top you will have a good view back to the Helvellyn range you walked earlier and can probably see tiny people on Striding edge. 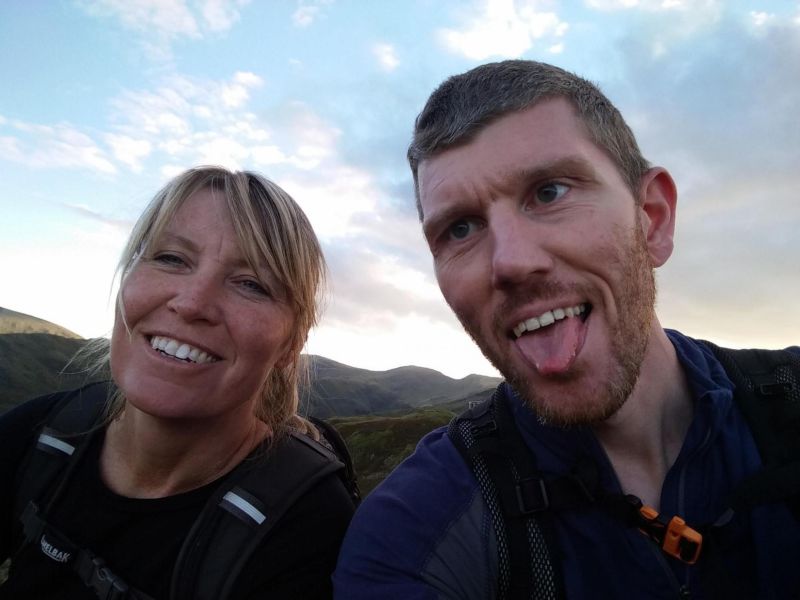 You now only have 2 more to bag for the day and its a very easy walk down to the 7th, with only a little bit of ascent to the small cairn and the penultimate fell of Birks.

From here you have a steep descent and in the book it says to head towards a wall corner at Trough Head I think its easier to keep further right, not losing quite so much height and then walk along the the flat ground higher up. This makes it slightly easier on the knees, it can be a bit damp on the approach to Arnison Crag, but you now only have the short ascent to the top and the final 8th Wainwright of the day.

Traci's knees were hurting after the descent from Birks and then the final steep descent from Arnison Crag, anyone looking on would have wondered what was going on as Traci walked the whole descent backwards to ease the strain on her knees. We decided to head into Patterdale for a meal before following the footpath alongside the road back to Glenridding. It was dark by the time we returned to the car after food. We enjoyed the day and the route, only the final fell, Arnison Crag had Traci complaining which was due to knee pain. 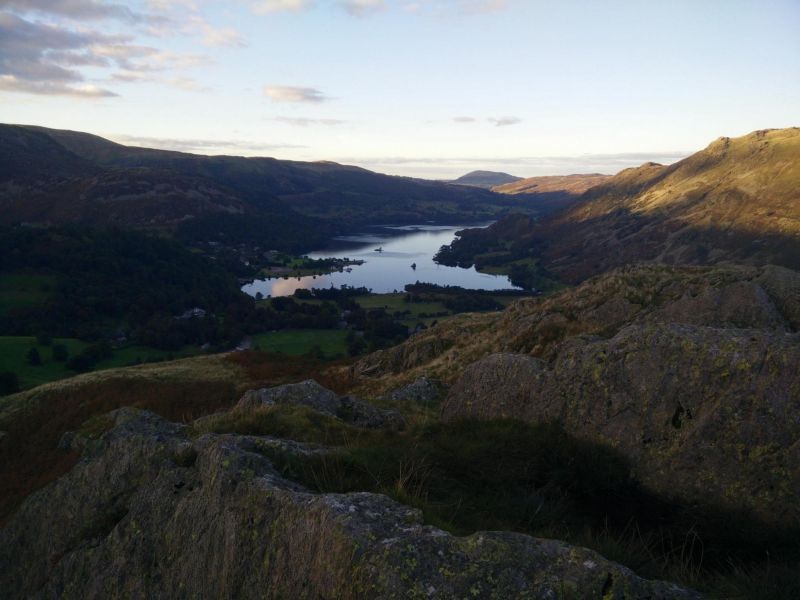 Just make sure you set off early to avoid crowds on this route and you will enjoy the day.