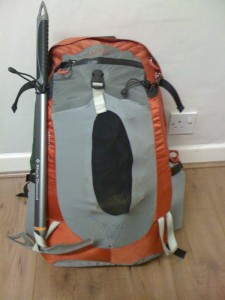 I'm sorting gear out for a trip to the Cairngorms. The intention is to base myself in Rothiemurchus camp site and do day walks. I will be meeting up with Phil Turner for 1 night, he will be running around in his new snow shoes.

I'm taking the gear for a multiday trip, plans are vague so unsure what I'm doing yet. I packed everything into a 50l Osprey Atmos which suddenly seamed very empty, wondered if it would fit into the 25l I'm also taking for day walks. To my amazement everything fitted in, its a bit of a squeeze but its all in. This is when I started to wonder what I've forgotten and thought I better unpack it and write a list. Here goes...

I will probably carry both sets of gloves, preferring to wear the sealskinz as they are lighter. The Columbia things are what I use for snowboarding but are needed when the Sealskinz get too wet and cold. I may buy some more gloves in Aviemore to replace them for walking, have used Icebreaker liner gloves before which I really like in conjunction with something else. Boots or shoes would be chosen depending on walk. I have also got some Inov8 310s but currently covered in mud from a run and wouldn't dry in time if I cleaned them tonight.