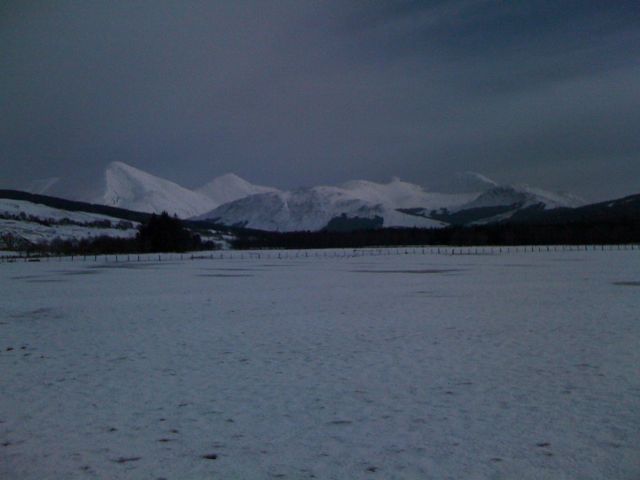 I'm sat at the side of "the loch of the lost sword" adding photos and uploading this report from yesterday. This reads really badly and the photos are too big again but what the hell it's a trip report not a book.

I started the day with another fried breakfast, I think my trip has been baked bean powered. At breakfast was the german couple from yesterday, they were finishing up and setting off.

I left about 40 minutes later, just after 9. The last time I walked this section of the way, i hated every step of it. This was because of the blisters I had then and didn't really take in the scenery.

The walking for the first few miles was very easy. As the height slowly increased, the snow on the ground returned. Once the A82 was crossed by the tunnel, the snow was notably deeper. Luckily it was quite compact and frozen, no problems with sinking. 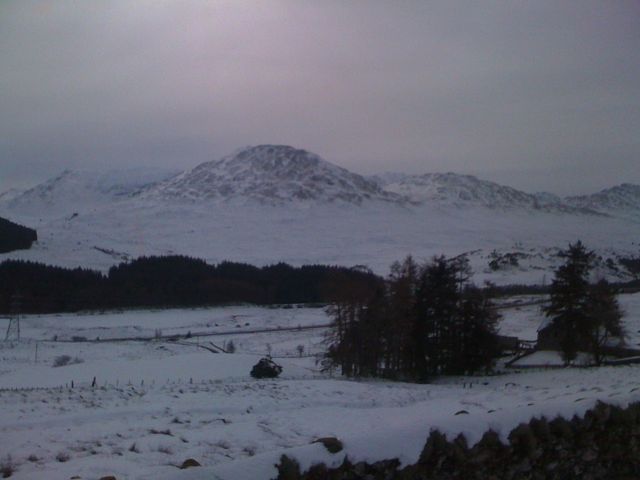 Looking ahead I could see a lone walker and further ahead the German couple again. Within 5 minutes I'd caught up the line walker. Stopping to talk I could see he was clearly struggling, he was carrying a large pack and explained he hadn't bargained on the snow. I didn't think at that stage the snow was a problem. He was aiming for Bridge of Orchy and had accommodation booked all the way up, quite a long trip considering he was already tired with about 14 miles ahead of him.

It sounded like he was going to get the train from Tyndrum up to Bridge of Orchy. I continued on by him. Another 10 minutes later and i had reached the couple, they seemed ok. They were aiming for Tyndrum. Again I continued on towards the wood above Crianlarich. As I rounded a bend towards them the snow became softer and each step harder. A bunch of young kids with their teachers seemed to be enjoyng it.

I reached the wood where the sign reads Bogle Glen. The snow was now about a foot maybe more in places. This is where previously I turned right and headed down to my overnight stop in Crianlarich and went home. This time I turned left up into the woods, the snow became deeper. Stopping to take photos, I noticed a group of guys heading towards me. They had turned around due to waist deep snow and were heading down to the road, intending to follow it to Tyndrum. They too were heading for Bridge of Orchy.

I pressed on up into the snow, it did become deeper, sometimes to the top of my legs. There were footprints, making it a lot easier than it could of been. Walking the extra miles yesterday had been a good decision again. My walk for the day was only 9ish miles. Wading through the snow was great fun, no doubt this wouldn't be the case if i was doing this hour after hour all day.

When I reached the road the guys who had turned around were strung out along it heading towards me. The man I spoke to earlier admitted he wished they had continued on. The road walk sounded worse with cars passing very close. Soon notices for Strathfillan wigwams appeared along the route. 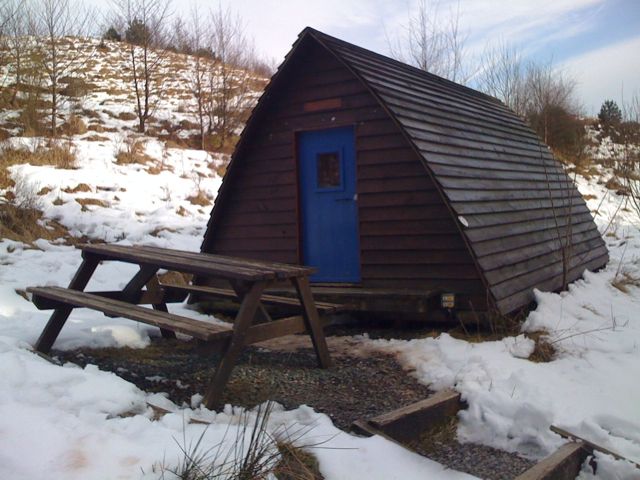 Arrival at the wigwams was the end of my walking for the day, a very early finish. Almost the end, I was given a wigwam at the top of the bank. The shop on the site sells various meat, Ostrich, Bison etc. If they had something I could of eaten with it, bread would of done but I didn't see any.

Next to my wigwam are the toilets, showers, kitchen, TV. I spent almost 3 hours in there on my own watching day time TV before retiring to my Wigwam and some more podcasts.

At the best of times I get songs, quotes and like stuck in my head. Monday all morning I had "Smoke me a kipper, I'll be back for breakfast" which was from Red Dwarf. Today when looking at my phone it said "No Service" most of the day. I listen to No Agenda and one of their catchphrases is "No service for you", so I've spent most of the day with bloody thing running through my head in the voice they use.

I've got no signal so this will be posted a day late. These reports are probably getting more boring by the day, but will be interesting to me to look back at. Tyndrum for late breakfast tomorrow then on to Bridge of Orchy...