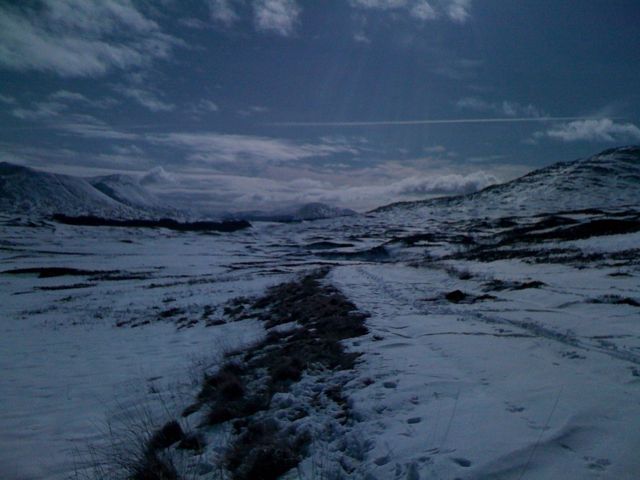 Phil arrived on Friday night bringing with him goodies, Sausage Rolls, rum & coke and a chocolate Easter bunny. This was incredibly generous, maybe these were actually to slow me down?

We stood at the Bridge of Orchy Hotel door ready to charge in the moment they unlocked it for Breakfast. The Bunkhouse is in a separate building out the back.

We both made light work of breakfast, Phil then sorted the gear he was going to take for the trip from various stuff in his car. While waiting, I noticed his Fiat Panda looke quite a bit like a Noddy car, a few minutes later Phil put on a hat that confirms Noddy still lives on. I kept the Noddy stuff to myself.

The route from Bridge of Orchy heads up hill through woods before reaching a small summit, with a view over Loch Tulla. We followed a couple of women heading up the hill who appeared to be going the same direction. They soon stopped to let us by, clearly our superior fitness was clear cough.

Phil very quickly regretted leaving his snow shoes in the car. I offered to wait, while he ran back down. I didn't have any, later in the day I wished I had.

The temperature over the previous 24 hours had increased and a thaw was in progress. Snow that a day or 2 earlier would of been hard, was now very soft. This made the walking quite hard and slower than I would of hoped. 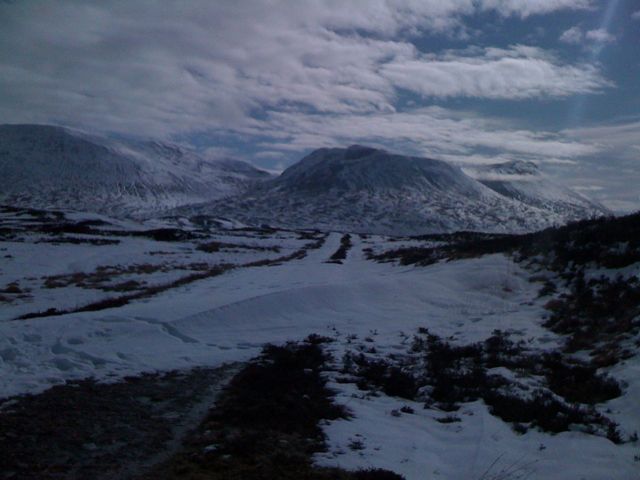 The weather got better, when we set off there was cloud at about 2200 feet. After 2 hours this had almost gone and the sunshine beat down on us.

The further we walked the more remote the scene around us became. I couldn't help stopping and taking pictures of the mountains in the distance and around us (most on camera, will be uploaded somewhere later).

We could see several deer in the distance and lots of tracks. Deer don't appear to walk in straight lines but weave along a track much like someone drunk. You could see in previous days that walkers had followed the deer tracks through the snow. I got sick of walking all over the place following peoples tracks and often forged my own, Phil probably wondered what the hell I was doing. 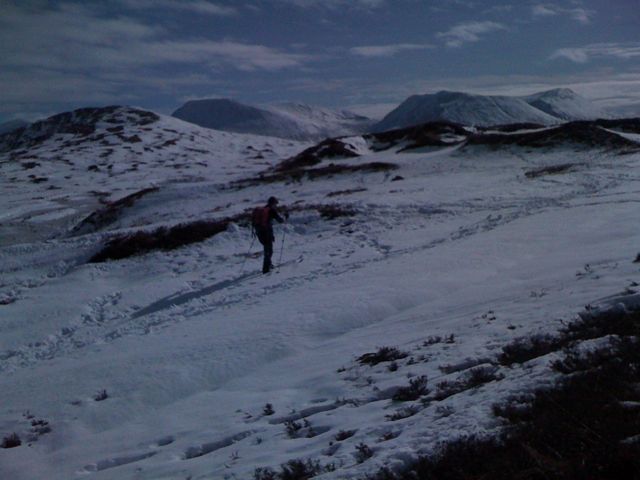 Eventually we stopped for dinner, sorry "lunch" at Ba Bridge. While sat a skier approched heading the opposite direction. We had noticed another skiers tracks from a previous day. The guy stopped for a few minutes, before carrying on. I was too busy pretending to be Colin Prior to hear everything he said. "Too hot" I think he said. The fact that someone can ski from the road near Kingshouse to Loch Tulla gives an idea as to the extent of the snow. Which ranged from a few inches to waist deep on an short expedition I decided to make.

Further along the track we saw another 2 women stopped for lunch. They had walked the opposite direction. As we ascended up a steepish bank with snow drift across it, I noticed a stone cairn reminding me of Thornthwaite in the lakes. Phil didn't seem to know what I was mumbling on about when I started heading off the track up hill. I said I was going to the cairn. Ge decided to relax at the bottom in the snow. It soon turned into an expedition with waist deep snow up a steep hill, clearly nobody else had been daft enough to walk up. The view did allow me to see the Glencoe ski tow and the pub (Kingshouse).

When I rejoined Phil we headed downhill towards Kingshouse, which was much like a mirage and didn't appear to get any closer. Eventually we reached the Ski road and Kingshouse beckoned. We thought about posing for the webcams, unfortunately they're the opposite side to the Climbers bar. Entry to the bar was delayed briefly by a deer 15 feet in front of us. Surprisingly the place was deserted, I'd only ever seen it totally full.

We recharged our batteries, Phil physically attempting to and failing with his solar panel. A woman came in asking for cigarettes but left with a cigar. She returned a few minutes later for another 4, I never saw anyone with her. 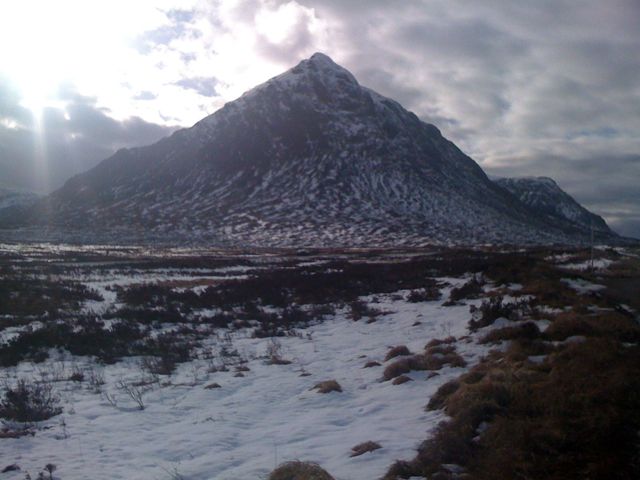 From Kingshouse we followed the path to the bottom of the Devils staircase. The snow was very wet and slushy along this section, I managed to submerge both feet above my gaitors leaving me with wet socks. A runner ran by us in the opposite direction, leaving us wondering where he'd ran from.

Before climbing up the devils staircase I bit the head off my Easter bunny and ate the contents of it's tummy. Don't worry it was a chocolate one containing buttons. God knows what was in that bunny but i set off at a quick pace, stopping when Phil made a noise letting me know he needed a breather.

The ascent was quite easy and we were soon at the top making the decision to press on to Kinlochleven rather than camp up there. We continued to see the footprints from the runner we saw earlier as we descended. The view to the north was stunning with massive amounts of snow still on the tops.

As the sky turned red and the sun started to disappear we were continuing to descend, but with more ascent than expected. The last few miles were made in darkness, the access track into Kinlochleven is never ending.

We tried the Blackwater bunkhouse but were told they had no room and couldn't camp until April. The pub had no rooms either, both directed us towards The MacDonald hotel at the far end. I decided to pay for a twin room for us not fancying putting the tent up in the dark. Phil returned the favour with a 3 course meal, not long later we were both asleep after watching the Simon Cowell interview of course (oh no). Oh and Phil demolished the place!!