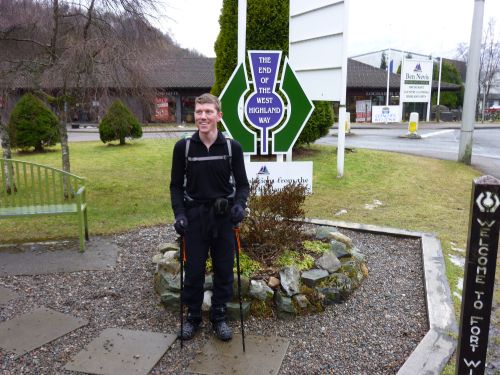 The alarm went off at 7am and I jumped out of bed so it didn't wake everyone else in the place, both of us were keen to have breakfast quickly and get set away. Luckily we were first for breakfast, beating the large group also staying by a few minutes.

The track out of Kinlochleven started a few yards from the hotel, climbing steeply up the bank side and continued gaining height quite rapidly. The weather was damp with cloud at 2200 feet again. Today though the cloud looked set for the day, as it was. We passed a woman walking her dog 5 minutes out of Kinlochleven, this turned out to be the last person we would see until almost at the road in Glen Nevis (5+ hours later).

As we walked higher the air became damper and eventually the rain started and forced us to put waterproof jackets on. The first time for the entire trip, it wouldn't be Scotland without some rain. It may of rained but there was still plenty of snow underfoot, much of it was the soft slushy kind. 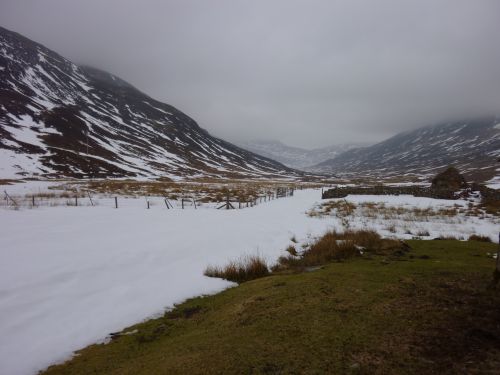 The walking was different again to every other day, this time along a high mountain pass. The rain didn't last long luckily, it didn't damped my spirits too much either. The scenery while not as spectacular as it would of been in the sun, was still impressive and probably made it feel more hostile and lonely. 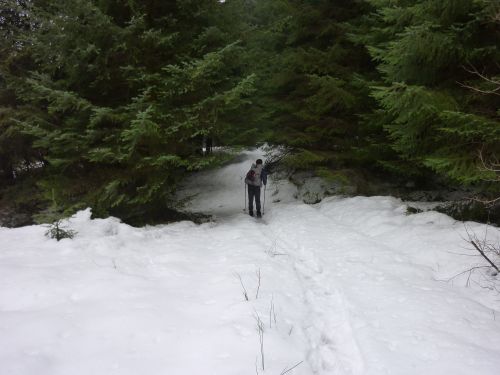 I found myself lost in thought a lot through out the day. My mind processing the previous days, what the future would hold and all sorts of other things. I still had songs and phrases stuck in my head, the only one I can remember now though is Robbie Williams - Man Machine. Which I thought was bad until Phil told me had the music you expect a man to strip to, don't know the name but know the tune. Thank god he hadn't started humming that the previous night, when sharing a room!!

You can tell on the WHW when you are nearing somewhere more populated by the number of way markers and information boards. The first we had seen today was near Lochan Lunn-Da-Bhra, on the map there is a large wood but this has almost entirely gone. We stopped here for "Elevenses", where I ate the remains of the goodies Phil brought the day before. This consisted of a sausage roll, half an easter bunny and a can of rum & coke. Phil finished his strange pies, curry and I dread to think what else was in them.

The information board happily confirmed we were over half way for the the day and the end. I say happily but in many ways it wasn't that happy, I knew with each step the end became closer. I didn't want it to end. 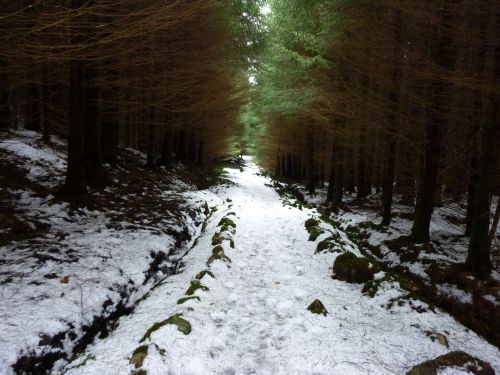 Once away again it didn't seem long before we entered a large wood, this time not felled. We kept catching glimpses of the path up Ben Nevis, which from just above the halfway lochan was shrouded in cloud (sadly). A few times I exclaimed it should be down hill now, before climbing through the wood (sure they've changed the path, lol). When the Forestry road was reached I really knew it was the final descent and the road into Fort William. We finally saw the first people of the day heading up towards us since Kinlochleven. We also saw a group of lads playing with what looked like BB guns, oh civilisation :-( 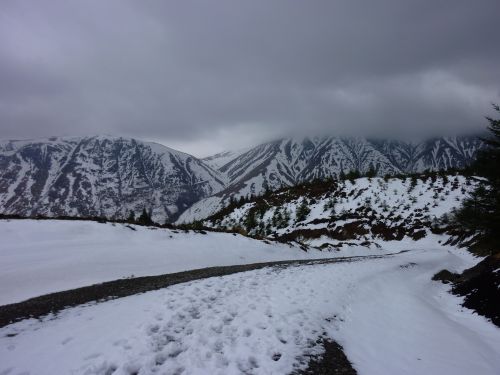 As I stepped onto the footpath next to the road in Glen Nevis I felt sad. The walk was almost at an end, this is the first time I can every remember the end of a holiday where I really didn't want to go home. Even when having good holidays in the past, I've always been ready for home by the end. This time I could of happily continued walking, hmm the Great Glen Way...

The last couple of miles must be the worst part of the West Highland Way, after a spectacular walk why make you follow the road into town. There are at least 2 other paths into Fort William, that would of been a far more fitting end to the walk. 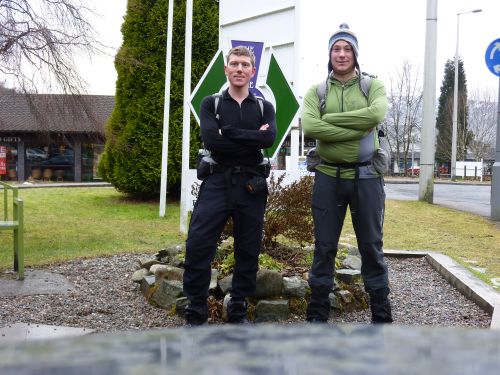 As so many before us have done, we stood taking pictures at the sign by the roundabout. There are plans to move the end to the square near Nevis Port and the Alexandria Hotel which would be an improvement. It didn't matter I'd completed the "Way" on the second time of trying. This time I loved every step of it (even the last bit along the road). I don't think I could every choose a better week to walk, the weather was stunning and the company the last 2 days wasn't half bad either (thanks Phil).

No doubt I will have some after thoughts, camera pics and some kit round ups for those more interested in that side of things.