I decided to have a late start for my first day on the challenge, I only had to walk about 13 miles. So I set off from the Kintail Lodge Hotel at 9:30, after most people had already left. There was a woman in a bit of a flap over her partners pack not being comfortable and asked some guy for help.

I walked down to the shore and dipped my toe in the water and picked up a shell as a souvenir.

I made good progress but didn't walk too fast, until I caught up with some other challengers. Quickly passing them and for some reason I picked up the pace. The weather was changeable from hot sunshine to downpour, I probably spent an hour of the day putting waterproofs on and off.

The views were fantastic, only spoiled by the rain. Unfortunately I had to watch my feet a lot due to the ground being very boggy.

After passing a few challengers earlier on, I never saw anyone else. Even when I passed the Youth Hostel (most remote one I think) there was no sign of anyone, although I didn't go in.

I headed to the area my route vetter had recommended over my original choice. I think my choice had been better. I wasn't too impressed and started to think about walking 2 days in 1. Continuing on my route I felt good but then suddenly my heart decided to let me know it was there.

I haven't had many problems for a while, this was strange because I wasn't walking anything strenuous. I sat down and admired the view and tried to slow it down. This didn't really work, luckily I had already noticed a fantastic camping spot on the shore of Loch Affric. So a slow walk down the bank and 10 minutes later the Trailstar was up and laying down inside for a few minutes sorted my heart.

Once back to normal I finished setting up my bivvy, sleeping bag, etc. While I was doing this I heard a "Hello" and another challenger appeared. I have forgotten his name (my memory is shocking) he's from Northallerton. Once we were both setup we sat on the shore talking for ages before retiring to our shelters when the sun went behind the hills. This may be quite a long night as it's only 9pm, still very light but cooler.

I will monitor my heart but don't think I will have any problems. Now and again it does this then it's fine for ages...nothing is ever straight forward. That's it for today. 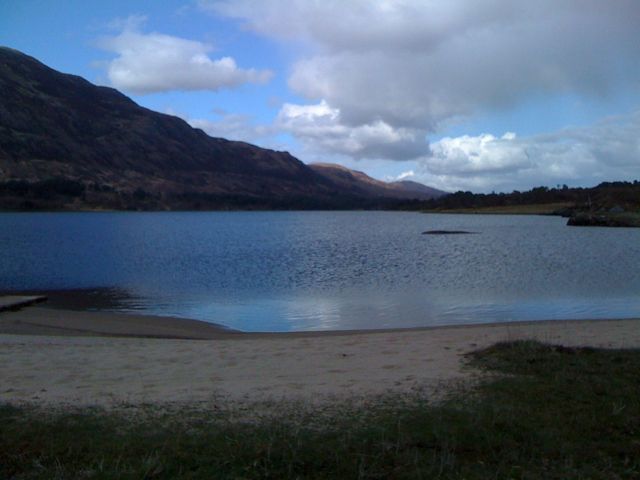 Where the hell am I now?