I set off early just after 7, deciding against calling into the shops for some food. When walking out of Fort Augustus I think I continued along the road further than others went and cut up a dry stream, marked as a path on the map. Two people had set off ahead of me and think I ended up in front.

Further up the track there's a pink painted lodge (forgotten the name) at this point I had marked my route near it but there didn't appear to be any path over. The double gates looked not to be in use and for fear of being chased with a shotgun by an angry laird I decided to follow the main General Wades road route. This way had a little more ascent but never mind it was probably faster due to the decent surface.

I'm not sure if it was the 2 Steak burgers, bacon roll and 4 pints yesterday but today I was a man on a mission. There was a lot of gradual ascent to eventually reach the top of the corriyarick pass, where there was still patches of snow. My average pace must of been over 3 miles an hour even though it was all up hill.

Lots of people had been warning about the descent down the other side but I made it to the bottom of the zig zag track in about 15 minutes.

I continued on passing what would be a nice camp spot with a little old bridge, waterfall and the faint remains of a building. About a mile or so after this the track turns into a single track tarmac road. Where a family were playing in the water, this is miles from any main road, god knows why they'd drive quite that far.

Another mile down the road I met Frank, another challenger who had also started the day in Fort Augustus. He like me was mulling over walking further than Garva Bridge, but there's no obvious stopping point until Laggan, conservatively 7 miles from Garva Bridge.

I left Frank, intending to decide once I arrived at Garva Bridge. The next mile or so along the road I started to feel the bag on my shoulders (god knows how those with bags twice the size felt). The prospect of an additional 7 miles didn't sound inviting.

Eventually once at the bridge I sat down and had food and water. I'd mote or less made up my mind to stop, when Frank arrived and said he was pitching.

That was 13:15, I'd covered the 15.5 miles from Fort Augustus over the Corriyarick in 6 hours. Sounds quick for me, considering the ascent.

Its now 6pm and no one else has arrived and camped, possibly some have continued on, but I know there were several setting off later who intend to camp here. Some maybe struggling.

My feet are fairly wrecked, far worse than when I quit the West Highland Way the first time 3 years ago. They are beginning to be covered in compeed plasters (which I'm quickly running out of). I have a different mind set to I did then and just try to forget about them. I wouldn't give in, they're only blisters.

Just as I finish this others are arriving, it's taken the first of them 10 hours. I must remind myself this is NOT a race. I've enjoyed the last few hours just listening to the river and relaxing (the peace I fear is about to be shattered!) 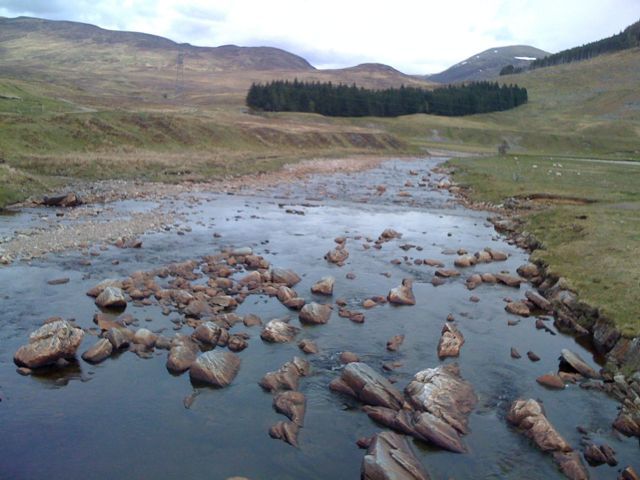