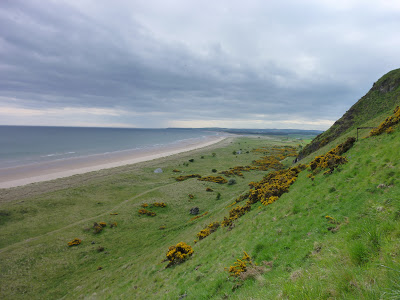 I was up at 4, after some coco pops and dried milk and covering my feet with duct tape I set off at 5am. I noticed that another challenger had turned up during the night. I walked down the road to where it looked like there was a bridge shown on the map, once by the river side there was no bridge just two cables going across and some sort of scientific testing gear. I thought about shimmying across but thought better of it. A ford was shown just down but decided against soaking my feet this early into the walk with 24 miles ahead of me.

Back to the road it was and heading for Ferney Bridge where a clear bridge was shown. I could see the bridge but what I thought would be the path took me to someones back door. The only other route was through the grounds of the same lodge by their cricket pitch, which had gates and Private signs. So decided to just keep following the road to Edzell rather than wasting time looking for bridges to avoid the road.

I made good progress and once into my stride the first couple of hours were quite pleasant with hardly any cars on the back road. The traffic picked up slightly as I got closer to Edzell. The hills were becoming noticably smaller, a good sign. Eventually I hobbled into Edzell and the first call was to the pharmacy for some pain killers. The 2 Ibuprofen I'd taken had worn off as had most of the skin from my heel.

Then onto the Spar for food and batteries and was asked if I was doing the West Highland Way, just as well I wasn't or I'd be over a 100 miles off course. I left the pleasant lady in the shop after asking how to get to the bridge, which is behind the petrol station. I stopped near the bridge to eat some of the goodies I'd just bought and to double doze on the pain killers. 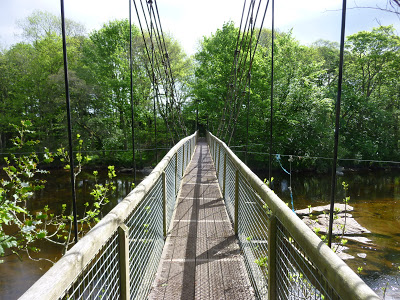 I knew there was a long straight road to come towards North Water Bridge, I hadn't realised quite how long this straight road was. I do not like straight roads that go on forever (several miles). After what seemed an eternity I rounded a corner (finally) and saw the Scottish flag flying at the entrance to the campsite. This would of been my final destination for the day if I'd been sticking more to the plan but I couldn't see the point of having 2 days of pain when 1 would do.

After a brief rest I set off for the final 8 mile push to the end at St Cyrus. I was tweeting as I went and was happy to receive encouragement from Hendrik, Darren, Joe and Becky. The next few miles went by in a bit of a haze maybe it was from all the over dosing on pain killers or me trying to take my mind off my feet. The path over Morphie was a surprise, being over a little hill and longer than expected. I hobbled/stumbled through St Cyrus heading for the sea, its not over until my feet get wet from the sea!!

I then saw just how steep the cliffs were, no wonder people kept mentioning them. I jogged down the steps and about threw myself at the sea. The cooling water soothed my feet, until the sand got into my shoes and felt like sandpaper. I really didn't care, I'd made it :-) 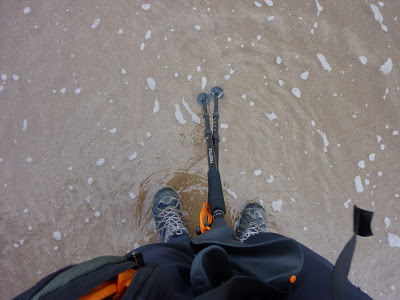 After sitting on a log and looking out at the sea for a while, I made my way to the bus stop to catch the bus to Montrose. I had to wait 20 minutes for the bus and ended up talking to the lollipop man who it turns out had done the challenge about 3 times before. By the time I got off the bus at Montrose I was struggling to stand, nevermind walk (the tablets had worn off again). I found my way to challenge control and was greeted with a cup of tea and a biscuit. Roger arrived a few minutes later, signed my certificate and I was also given some Bowmore whiskey, a badge and T-shirt. After signing the record book and leaving a message, I headed for the train station and home...

I have loved the journey, although maybe not every step of the last few days. Even while still in pain and imagine I will be for several days looking at the lack of skin on several parts of my feet, I would like to do it again. It's better than being at work and what a way to see Scotland and so many great people (a couple of annoying ones too). Looking forward to next time...