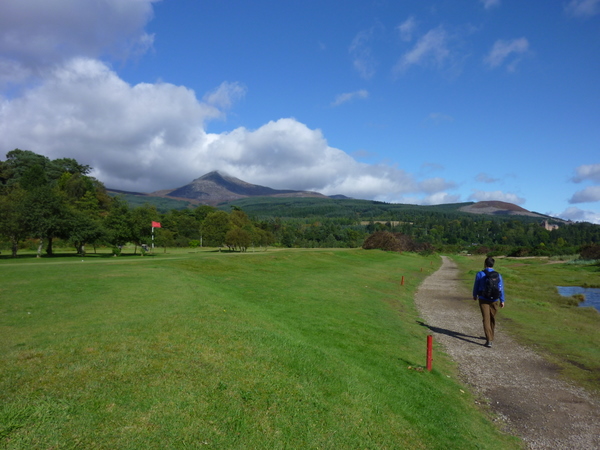 An invite from Phil Turner earlier in the week found me in Ardrossan Marina on a Friday night, awaiting his arrival on the train from Glasgow. The journey from the North East of England had been far easier than expected, mainly due to not having to travel as far North as Glasgow. I sat in the car reading Jack Londons "A call of the wild" in the Kindle app on my iPhone, before I knew it the train was pulling in and Mr T arrived.

The plan was to spend the night sleeping on Phils boat in the marina before getting the ferry across to Arran in the morning. It worked out cheaper and certainly easier to catch the Ferry than sailing across. Probably a whole lot safer too, knowing how things "happen" when we are together. After a visit to the local ASDA for supplies of pies and beer we spent the night catching up before we fell asleep to the sounds of the drunken people leaving the local Italian restaurant.

We were up in plenty of time to catch the second ferry of the day at 9:40, we decided to pay another visit to ASDA in the hope of sausage sandwiches but they had no hot food. Phil did manage to buy some Peperami sausage rolls or was that the night before, ASDA trips meld into one. 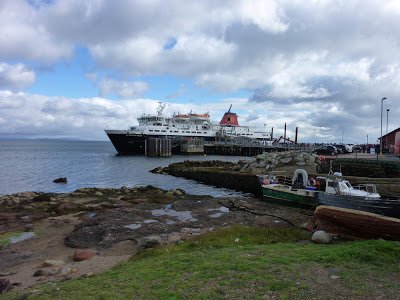 We headed to the Ferry terminal and bought our tickets, at only £9.70 for walk on passengers, its a cheap weekend trip. Phil bought 3 return trips for a bigger saving, he's writing a walking guide book to Arran, so this will be a regular excursion for him. The journey across takes only 55 minutes and you are greeted with beautiful views of Arran and the other islands to the North. As we disembarked the ferry, there were buses waiting which would take you around the road that circles the island. There really is no reason to take a car to Arran, there are cars available for hire from the Petrol Station if you needed one. We had no intention of using anymore transport today though. 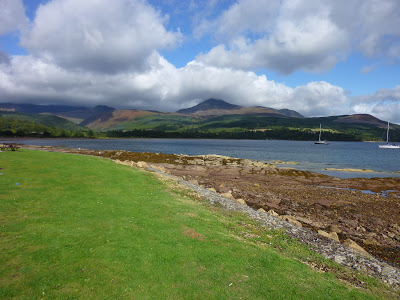 We stopped on a picnic bench to orientate ourselves and I encountered the first problem of the day, one of my Pacerpoles had stuck solid. I spent the next 10 minutes trying to release it. Most people may of given up, but I needed the poles for my shelter I'd be camping in. I'd rather fix the problem at the start of the day than wait until the end. After much faffing, I eventually succeeded in freeing the bloody thing and extended the poles and we finally set off in search off our start point for the first walk of the day. 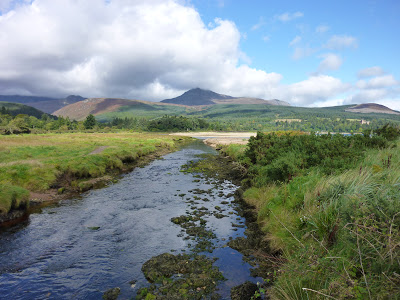 From the moment you step off the Ferry, Goatfell greets the visitor, looking down menacingly from its perch 5 or so miles away. We headed up the coast following the beach, which was largely closed off due to broken glass. We thought it a bit strange to close an entire beach for some glass, but found out the following day that the beach had been polluted with rubbish from a local dump and the council had shown no sign of cleaning it up, to many peoples disgust and dismay (It looked OK to me). Once past the closed beach we walked along side the golf course and on to an open beach. This lead us in the direction of Brodick Castle and several local attractions, including the Arran Brewery where we stopped to sample a bottle each. 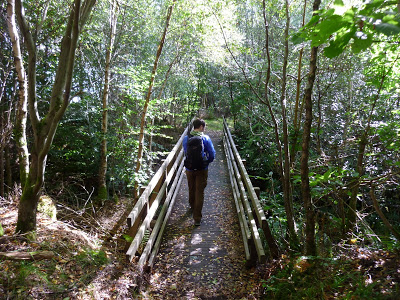 We sat outside "testing" the Arran Ale, the lady in the shop asked if we wanted anything else before closing up for her late lunch. This was our cue to set off on our next short walk, a wander around the Brodick Castle trails. There are several marked trails which are free to walk around, we must of taken a wrong turning and ended up being asked to pay to go into the Castle and gardens. Pay, I think not and we retreated to a different path and eventually ended up on the cemetery trail among others. This led us to the ranger station which appeared empty and a visitor centre where Phil tried to electrocute himself on one of the interactive displays. I admired the ginger stuffed badger, before leaving in the hope of visiting the adventure playground. I produced my sad face, when Phil informed me we weren't going that way. My smile soon returned when a notice ahead informed us of the path closure and to follow the path to the "Adventure Playground". Sadly the zipwire was broken and there were lots of kids around, I was about to have a go on the monkey bars, when Phil strode off towards the Castle. Clearly he wasn't amused at being acompanied by a 31 year old big kid. 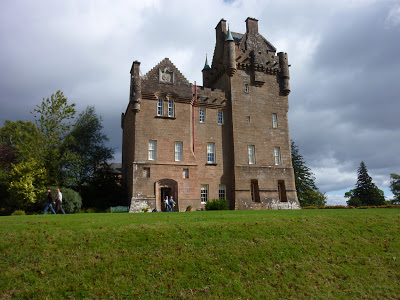 We took great delight in realising we were now at the Castle, that the lady had earlier tried to charge us for. We didn't enter the castle, feeling that was a little too cheeky. We also didn't walk around the gardens, but on our way back to the start of the walk we passed the lady who'd try to make us pay. She wasn't amused and I tried to explain we had just followed the free trails, "OK, whatever" was her response. 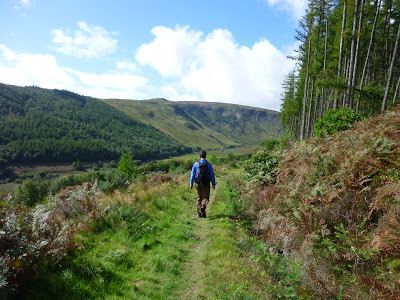 Our third walk of the day was to be the best so far, we headed up the trail for Goatfell before turning off through some beautiful woodland and heading towards Glen Rosa. As we wandered out of the woods we almost stood on a toad in the middle of the path. He happily posed for photos and we left him to soak up the sun. We had started to keep an eye out for possible camping locations, Glen Rosa was the only place so far we had seen where this was remotely possible (Except for inside the castle grounds). The "official" campsite could clearly be seen on the other side of the stream with a few tents already there. We continued walking up the glen and were greeted with a magnificent view of the mountains ahead (Cir Mhor), this wasn't the target this weekend though. We crossed over the stream and headed down the other side of the glen noting a couple of possible places to camp as well as the £4 charge on the campsite. Glen Rosa was the only place we had seen where you could camp "wild" or not. 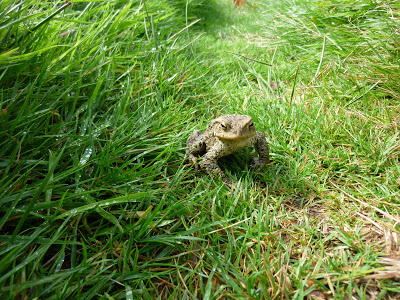 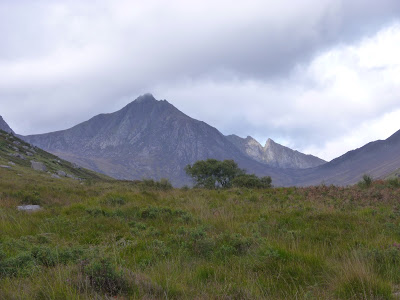 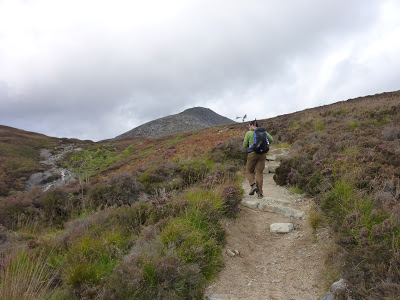 By the time we had finished the Glen Rosa walk we didn't fancy retracing our steps 3 miles up the glen to pitch and decided we would start to walk up to Goatfell, which was planned for the following day and camp somewhere on the way. As we quickly gained height, it became clear there was nowhere to pitch, either dense woodland, chest high bracken or further up a mixture of rocks, heather, bog and tufts greeted us. We made the decision to press on to the top and hopefully find something on our descent via a different route. 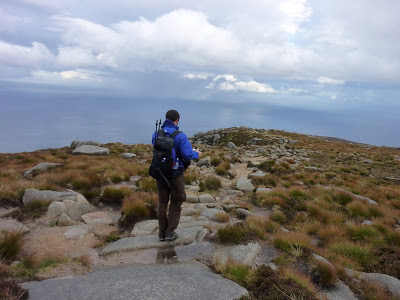 As we climbed higher and passed the last of the people descending, the weather decided to give Phil a chance to test a waterproof jacket he'd brought to try. It certainly got a test and the cloud clung to the top of Goatfell, preventing us from stopping to brew up at the top as we'd hoped. The cloud completely obscured the view and any pictures sadly. Rather than lingering and getting wetter, we descended following the ridge down to the East, ignoring the fork to the right that we had ascended a few minutes earlier. Once out of the cloud and the rain we were at least given a consolation prize, a view of the islands of Bute, Little Cumrae, Great Cumrae and the mainland.

As we descended we still couldn't find anywhere to pitch, everywhere was overgrown. We guessed this could be due to the total lack of sheep. Passing through a gate towards the woods we were hopeful there would be something among the trees, unfortunately not. Soon after we were reached Corrie and headed for the bus stop. Sadly the last bus was an hour earlier, which left us with a 5 mile walk along the road to Brodick. We thought about catching the ferry back to Ardrossan, we'd completed all the planned walks for the weekend in 1 day. We were confident there would be a ferry at just after 9, as that had been the day before. Phil checked on his phone and found that the last ferry had already left the island. We decided to walk towards Brodick and hopefully find somewhere to camp on the way. On the map there was a picnic area marked, unfortunately when we got there it was a tiny area right next to the road. I would of happily of pitched, with the prospect of a walk in the dark along the road the only alternative. It really wasn't a good place to camp though and we continued on, I put the head torch on to prevent us becoming road kill. This is when Phil realised he was missing his, oops. 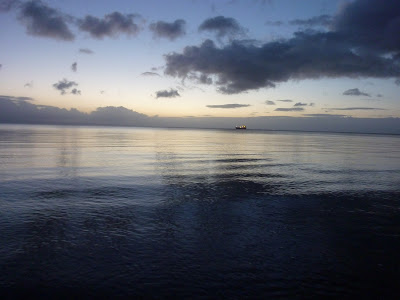 Eventually we reached the familiar area near the Castle and I think it was my idea to camp on the golf course. It was pitch black and who was gonna notice. There wasn't really any alternative, so we pitched up in the dark on the edge of the fairway, as close to the beach as the hawthorn would allow. I had the Trailstar pitched in a couple of minutes, but unfortunately Phil had brought a Hyperlight Mountain Gear shelter to test and this would be the first time pitching. Oh did I mention he'd forgotten his head torch, I lent him mine and he managed to pitch it and we settled down for the night. The alarm was set for 5, to be away early before we were spotted. I was awake before the alarm and heard Phil moving, I'd checked and realised sunrise wasn't until 6:50 and we changed the alarm to 6. I didn't sleep though and by 5:45 started to pack and waited for Phil while I was attacked by midge. While Phil packed I enjoyed the view across Brodick Bay before the sun rose. 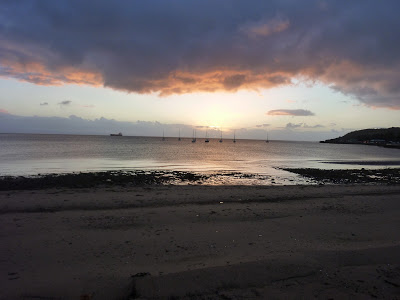 Once packed we walked the 2 miles into Brodick, taking our time thinking the ferry went just after 9. Sadly we found it was a lot later, it wouldn't arrive until 10:40. What do you do in Brodick on a Sunday morning, not a lot. We read every notice in every window several times, we managed to waste about 30 minutes boilding our stoves and enjoying a brew. Then wandered aimlessly around the Coop when it opened at 9, spending 20 minutes and only buying some refreshers. We spent the last hour sat in the the ferry terminal, where I read some more of Jack Londond and Phil memorised the timetable for every ferry to every island. 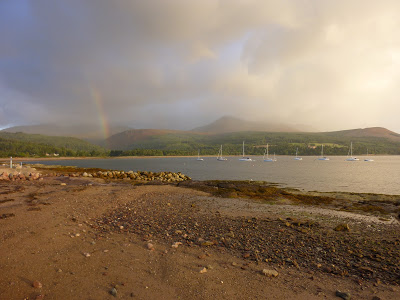 The highlight of the Sunday morning was boarding the ferry and heading straight for the cafe, where the full breakfst of 6 items was only £5.95 and included coffee or tea. We both would of paid a lot more and expected it to be more considering it was on the ferry. By the time we demolished the breakfast and people watched for a while we were docking in Ardrossan. Where I left Phil and drove back home. The weekend was another enjoyable one, other than the search for a pitch and the total lack of things to do on a Sunday morning in Brodick. I intend to return to walk a few more of Arrans pointy bits!

St Sunday Crag – brought to you by the letter A