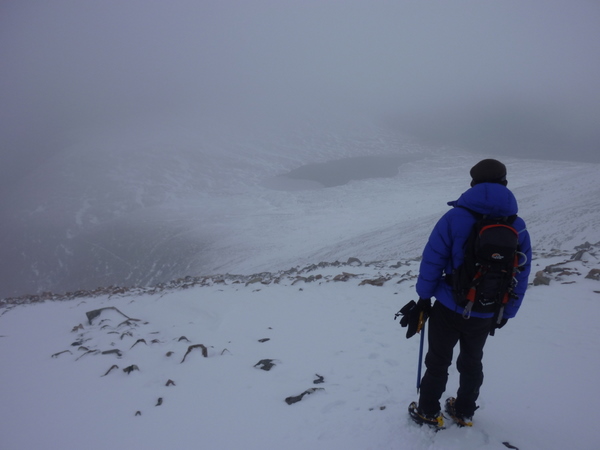 Following on from the previous post about getting to the hills cheaply, my intention on the trip was to spend 2 nights wildcamping in the Mamores. Sadly the weather had other plans. I closely monitored the SAIS avalanche forecast and decided I would go and take look. You get days when you know you are not meant to do something, this was to be one of those. 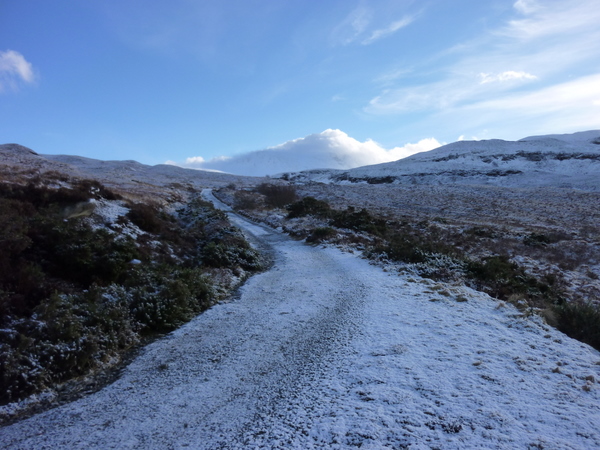 There had been snow overnight when I set off and everywhere was sheet ice, luckily the OROC 340 spikes gripped perfectly. The 2 miles up to Fort William quickly passed mainly because I was admiring the stunning snowy scenery of the surrounding mountains. As I walked over the hill and down into Glen Nevis a friendly looking dog headed towards me and decided to bite my leg, nice. Luckily it never broke the skin and I carried on only to find the forestry paths closed for logging. I decided that due to the Avalanche warnings, logging and being bitten I would change the plan to Ben Nevis. 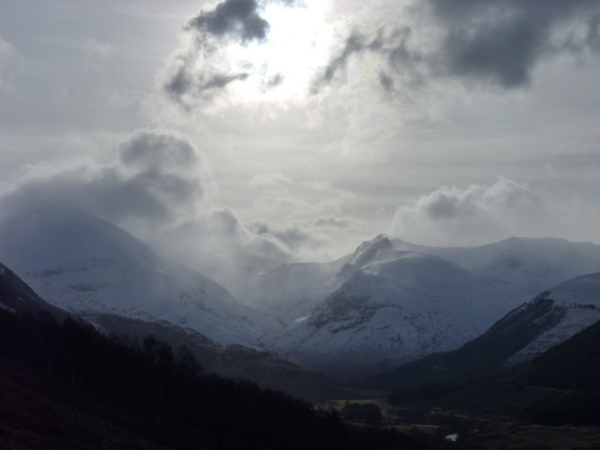 By now it was getting a bit late and as I headed up the path from Glen Nevis Youth Hostel just before I joined the route from the Visitor Centre I stoppped to look at the Mamores as the wind picked up. I could see the spindrift and was pleased I had decided not to head that way. My heart then decided it would let me know it wasn't fixed yet (operation a week later), it began hammering away. So I sat for a while and decided that today was not meant to be and when my heart sorted itself out I rang my dad to find out where he was. I joined him on the last part of the Cow Hill walk and finished with a pint in the Grog and Gruel afterwards. Before deciding to turn back for the hotel I made the decision and a promise to myself that I would return the following day, skipping the free hotel breakfast and bag the Ben in winter.

The following day I found myself retracing my steps from the the day before. The snow at lower levels had disappeared and Glen Nevis was quiet. As I walked the Visitor Centre path I could see someone further on and others behind. I slowed to let one fast walker overtake, I didn't want to feel I was racing today after the previous days heart problems. 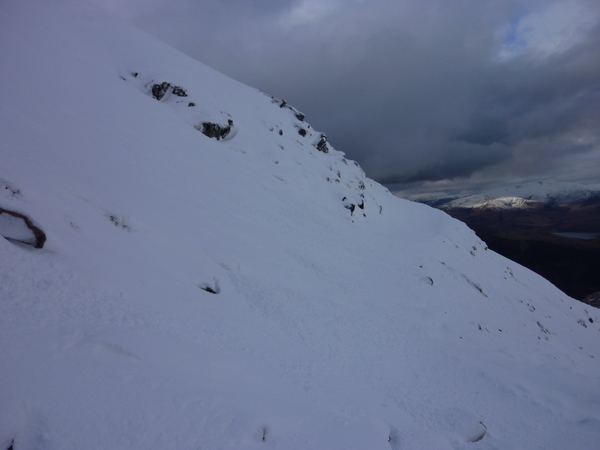 I made steady progress staying a constant distance from the walker in front. Once the dog leg before the Lochan was reached, snow started to appear on the path and it quickly became a few inches deep beside the lochan. It was easy going though, with very little wind and at this height clear conditions. Once I got towards the turn off for the route around to the CIC hut, the 2 walkers ahead stopped. It was fairly clear they didn't want to be the first person to walk up. Today I was determined, so happily passed them and started to make the first footprints of the day. The snow became increasingly deep and near the ford across Red Burn there were signs of a recent(ish) avalanche. I stopped for a drink as the other walkers held back. Plodding on the path was almost invisible now and it was a little precarious at times and knackering, especially when I kept falling down the gullies dug out for the water to run through the path which was hidden under the snow, this was often up to the waist as I pulled myself out each time.

Eventually I decided I was fed up of making tracks for the other 2 to follow and sat down to let them catch up. I got talking to one of the walkers "Andy" and he told me the other guy was Polish and didn't speak much English. I was asked if I wanted to walk to summit together for safety, which was a good idea. The 3 of us continued upwards as the visibility reduced and the snow turned to ice, we stopped to put crampons on. I was still happy in the OROCS but thought it better to change now and also swapped the Pacer Poles for an ice axe, which I probably should of done sooner.

We took it in turns to lead, as the Polish guy lead I started to think we were going the wrong way as the slope got steeper and it felt dangerous, there was a High risk of Avalanche and it felt we were going too far around the mountain. While I was looking at the GPS, Andy behind shouted that he didn't think we were going the right way. Pleased that it wasn't just me, we headed back down and between us using GPS, compass & map we got back onto the path (not that we could see it). From then on we double checked directions with the compass and my iPhone (would of been easier if mine had a digital compass). 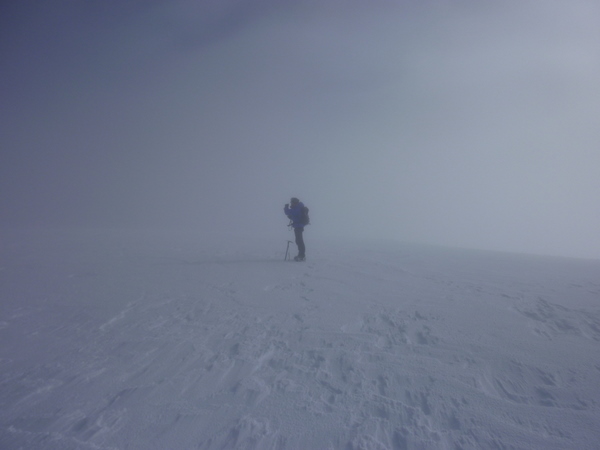 The visibility at times was very low, almost a total whiteout. I got cramp twice, I couldn't lift my legs and considered turning back the first time this happened. It was cold, I hadn't really eaten much and Andy suggested we stop for something to eat. It was a good call and afterwards it was only a short walk before we reached the flatter section to the summit. Trying our best not to fall down any of the gullies which would be easy when you can't see much and every direction is white. When I walked back down the tourist route in August the cairns were very clear, not so in winter we only saw a couple. 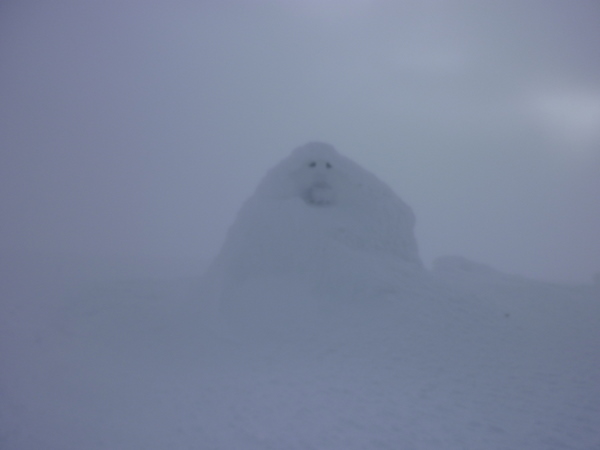 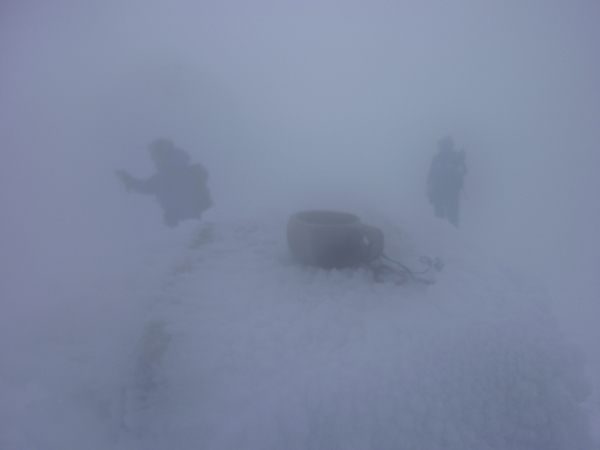 We were almost on top of the summit cairn and shelter before we noticed them. The shelter was obscured by snow making it look like it had a face. We shook hands as all moutaineers should, took photos (including Kuksa shot above) and stopped for food and talked for a while.

After 15 minutes or so on the top we headed back following our own footsteps and passing a handful of others as we got lower. Somewhere below 3000 feet we were stopped by a man asking what the conditions were like. Andy was concerned that he had no ice axe or crampons. He carried on anyway, as he passed I noticed a Shearings tag on his bag and later spotted him in the hotel. 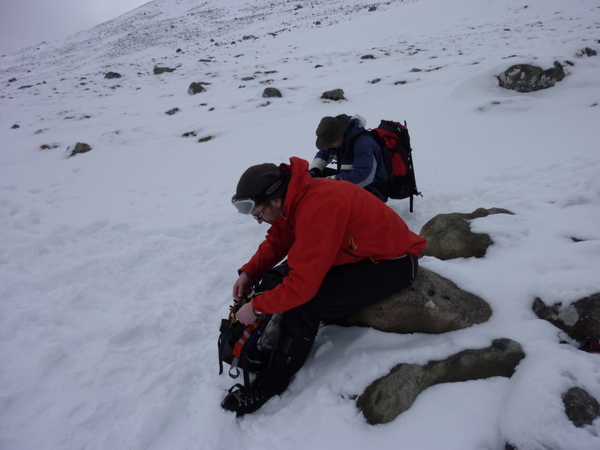 The people who we passed appeared to of made good use of the tracks I made earlier, myself and Andy talked all the way down about various walks and places. Unfortunately the Polish guy either didn't understand or didn't feel like joining in. 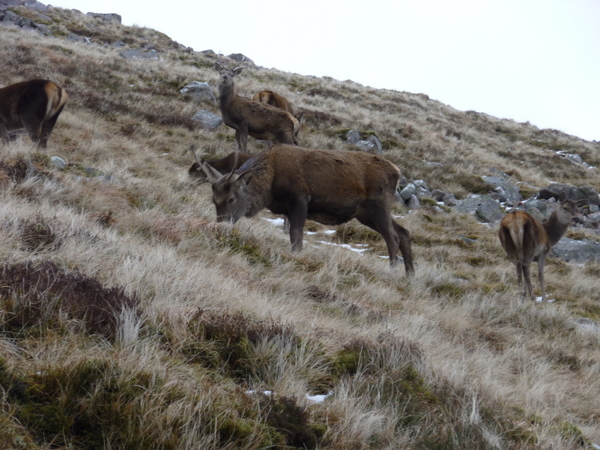 Below the Lochan a heard of deer stood watching us only feet away, unconcerned by our presence.

At the Youth hostel path, Andy said his goodbyes and headed for the hostel taking my number to contact me about photos and maybe a pint later. Unfortunately his phone crashed the first time he tried and I'm not sure if he took my number correctly the second time or if he just decided not to contact me but I never received a text. If anyone recognises him please let me know. All I know is he's called Andy and lives in Birmingham and has walked in the Alps and I think Bavaria as well as the UK.

I also said goodbye to the Polish guy at the Visitor Centre, I still had over 4 miles to get back to the hotel and a well deserved meal and pint.

While I may not of got my wildcamp in the Mamores, a walk up Ben Nevis in winter isn't a bad alternative. 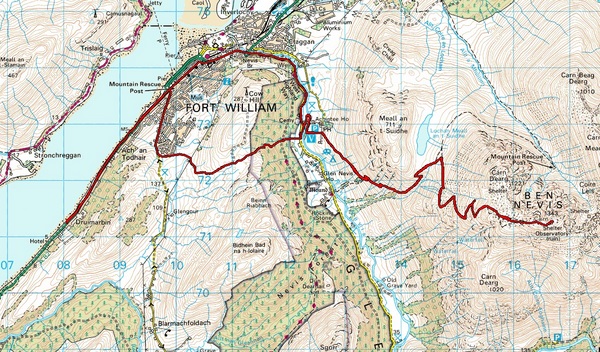