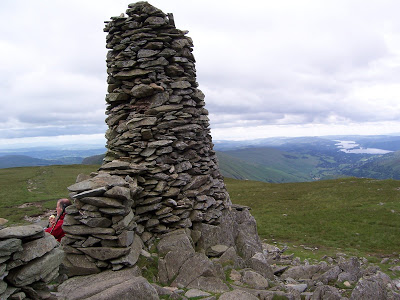 A couple of weeks ago I was discussing holiday at work and realised I had several hours I had to take fairly soon. I am now off next week, which is about the only opportunity I have due to work deadlines and the forthcoming Wainwright C2C. I quickly came up with the idea to do an "Attack of the Wainwrights". I have already walked nearly all of the highest 50 Wainwrights except for St Sunday Crag & High Raise. This leaves lots of lower ones, again I have done quite a few but there are lot left undone.

The biggest problem is the lack of funds at the moment and I'd already promised myself that I was walking the Ring of Steall at the end of that week. So a plan has unfolded to take a train from Durham station via China to Penrith, surprisingly an open return ticket only cost £23.70 including booking fee. I can use the return ticket anytime within a month, just in case I decide I don't want to go home. The initial plan was to walk as many Wainwrights as I could fit in, between the Saturday and the following Friday. I've been thinking a lot recently (always dangerous) about my reasons for walking. I have tended to rush from hill to hill, fitting in as many as I could, this is ridiculous. When rushing between hills, there are so many things you dash by and don't see, this is the same in life in general.

Alert Alert - going off on a tangent: Ever since the TGO Challenge I have gradually been trying to slow down and appreciate my surroundings more, stopping to look at things that I have walked past hundreds if not thousands of times and just never noticed. An example of this when walking home from the local shop over the fields I wondered why there were some metal railings in the middle of nowhere. I had sat on these as a kid and passed so many times, never stopping to think why they were there. When I thought about them, it became clear they were the remains of a kissing gate and there was another set 50 yards away. Knowing a railway ran between them and a check of an old map from the 1950's I realised this was where the path used to run and to cross over the railway line (long gone) you had to pass between the kissing gates. While this may sound boring and I guess is, it can be surprising what remnants of the past remain that we just don't notice. I could mention 5 minutes later I wondered why there was a large out of place solid wooden fence, which turned out to be the divider between the road and an old tramway that ran the other side, but that would just put anyone making it this far to sleep.

"Focus on the journey, not the destination. Joy is found not in finishing an activity but in doing it" - Greg Anderson 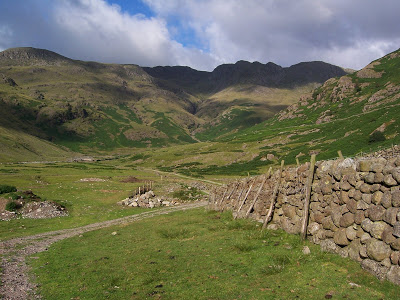 Back to the plan which I have intentionally left as open as possible. The only things I have planned are the train which at the latest I need to come back Friday morning to give me time to drive to Glen Nevis for the Ring of Steall walk on Saturday. I also know which direction I am going from Penrith which will be South towards Loadpot hill, then I will see where my feet take me. The lack of funds is also a good excuse to test out different food options. I looked at more dehydrated meals, which I normally use but at £4+ per meal I could get something in a shop for less and not have to carry them. I am thinking about taking some Salami, which I noticed in Lidl (200g assorted or 300g large). This along with Pitta breads, iceberg lettuce (shredded in freezer bag) and some pickle should last a few days and hopefully taste nice. I will also take some cereal pre-mixed with powdered milk in freezer bags which I used on the TGO Challenge. As a backup I will have a dehydrated meal, cereal bars and some chocolate. The only thing missing is an emergency sausage roll!!

I am hoping the walk will be very different to anything I've done before, with the planning being done as I go, rather than routes I have pre-planned.

On the Friday, once home, I will have a quick turnaround before driving up to Glen Nevis. I will probably sleep in the car or if its not too late when I get there I will wander along the start of the Ring of Steall and hopefully find somewhere to camp before climbing any mountains. Once the Ring of Steall is completed I will be heading down to Bridge of Orchy to hopefully meet up with Helen Fisher on Sunday, who is walking the WHW. We may then clamber up Beinn Dorain if both of us feel up to it, another of those hills that is on my "must do" list.

My previous post mentioned about my dreams for the next year, these walks are some of the tests I am setting myself before making the ultimate decision. A week walking over possibly 40+ Wainwrights, the Ring of Steall, Beinn Dorain & Beinn an Dothaidh while exploring along the way sounds like a suitable mouth watering test :-)

Now is the Time