One of my (many) problems in the past was that I held onto masses of paper work, magazines and lots of other stuff. A couple of years ago I started using Evernote which to quote their Website "Makes it easy to remember things big and small from your notable life using your computer, phone, and the web". I messed around snapping pictures of things I wanted to recall later and eventually decided to buy a ScanSnap scanner that allows me to stack documents, press one button and it's all scanned to Evernote, which then makes it searchable from any computer or phone.

You may be wondering what this has to do with the outdoors, well I'm getting there. I often receive strange looks from people when I explain I scan every receipt I ever get, yes even if its for a few pence. Almost every bit of paper that comes into my life is scanned into Evernote. This leads me onto the Outdoors use (finally), I soon realised that I could get rid of those piles of magazines and routes I had cut from various places and store all of them in Evernote. 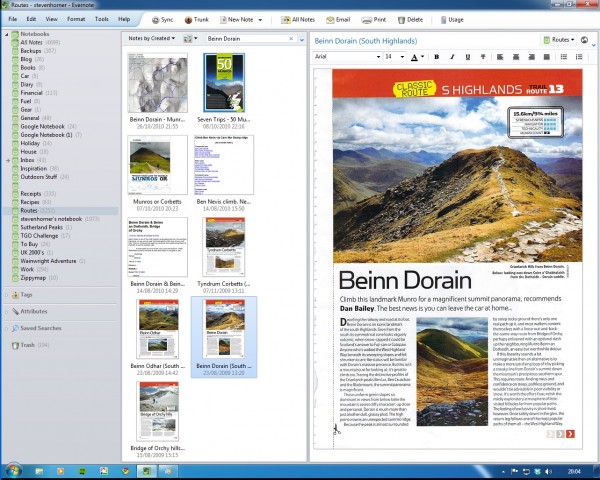 Why would I want to go to the trouble?

Imagine you are planning to go to the Lake District and you decide you want to walk Helvellyn. You can type Helvellyn into Evernote and it will return all the routes containing Helvellyn or if you aren't sure what hill to walk. You could just type a town for instance Fort William and it would display any routes mentioning Fort William. If you have a newer phone (iPhone, Android, Blackberry, etc) you can search by your location. So Imagine you are in Ambleside and wanted a route nearby, you could ask Evernote to display any routes near your location using the phones GPS. For this last scenario you need to have entered the coordinated for the scanned document which takes less than 20 seconds.

Your routes don't have to remain in a silo, you can share folders with others who could search your routes/documents. If you are thinking of sharing be aware of the copyright for the documents. I have over 1200 magazine routes scanned and if I made this public I would imagine the publishers may not be too happy. I have also attached many GPX files to the routes which I've drawn. My iPhone allows me to search for routes nearby then open the GPX files into Memory Map or Viewranger all from the phone. Just imagine every route you've ever seen in the palm of your hand, that's what I've got.

You don't just have to scan documents, you can clip pages from website. For instance if you see an interesting route on Walk Highlands (or any of other site) you could press the Evernote button in your browser and have it saved to your own routes. There are tons of possibilities...

Like many backpackers/walkers I own several books covering lots of different areas. I am a lightweight backpacker and I think hell would have to freeze over before I would carry a heavy book into the hills (small one maybe). Several times I've wished I had one of Wainwrights guides just so I could read what he said while I sat on a hill, but my guides are part of a box set and I don't want to ruin them. Evernote, my phone and with me being a geek I decided I wanted to scan the Wainwright guides and have them available on my phone. Using Evernote I could make each hill section geo-located. Basically this means if I am on Blencathra I can look at my phone and it will know where I am and show the Blencathra section of Wainwrights guide along with any routes I've scanned or drawn for it (said I was a geek). 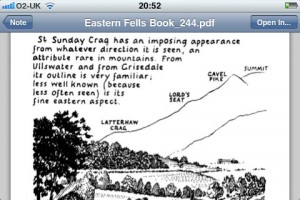 I had the problem of how to get the books into the computer, my first try was to use a flatbed scanner, I could feel my life gradually slipping away and the results weren't great. I then bought a second hand copy of the Eastern Fells and pulled it apart, using my ScanSnap s300 scanner to scan it in minutes. This worked but it felt wrong ripping a book up, also expensive and not really viable. I then decided to build a cheap book scanner which worked amazingly well. Didn't I mention previously I have part time OCD ;-)

I could go on and on about other geeky stuff but I can feel most readers have lost the will to live and will end this here. If anyone wants to know more, leave a comment or contact me on Twitter @stevenhorner.

Taking a back seat - Coledale