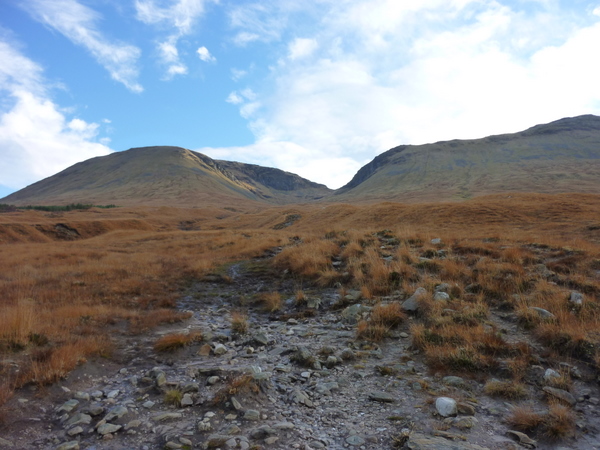 Beinn Dorain; oh how you have escaped my presence on your summit, each time I've hoped to wander your slopes something has occured. I've almost lost count of the number of times I've intended to walk up Beinn Dorain and have sat in front of the fire in Bridge of Orchy hotel staring at it. This time I would of crawled up if my legs had fallen off, I was determined. Setting off late Friday afternoon with a 5 hour journey ahead I felt more like going to bed. Except my bed for tonight was to be the back seat of the car in the car park at Bridge of Orchy.

Trip Report
The jouney North was relatively uneventful and passed quickly listening to No Agenda, the only thing of note was being stopped by police at Tarbett to ask where I was going and for what the purpose. I almost said none of your business but decided it would be just quicker to just answer him and tell him I was delivering toners from Yemen to the local militia, he let me carry on. I bed down for the night at about 9:30 but didn't manage a lot of sleep until about 5. My alarm rang at 6 and I decided I was too tired and went back to sleep for another 2 hours. My later start had made the decision I'd been toying with on the way up, abandoning the wildcamp and going for a day walk up Beinn Dorain and Beinn Dothaidh. 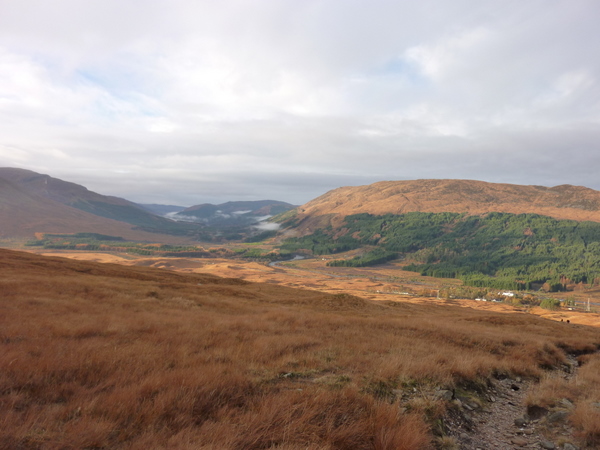 I didn't feel a 100% as I left the car, a pounding headache and not walking like a panther (smooth and quick) as normal confirmed I made the correct decision to change to a day walk. The bonus would be eating at The Real Food Cafe later in the day. Even with my later start my feet were the first to tackle the damp slopes that morning but I passed a large contingent of walkers preparing to carry what surely was enough gear for a 3 week expedition to the Arctic (they only walked Beinn Dorain).

The expedition set off a minute later and 100 yards behind me. Maybe its just me but I hate people being close behind, somewhere in my head a competitive spirit lurks and even in my very slightly depleted state I speeded up to put some distance between me and the maurauding pack of arctic adventurers. The path up to the bealach is wide and I can understand why it would be more pleasant walking from another direction, at certain points I thought I'd been transported back to the bogs of doom from my previous walk. Higher up the path became more rocky and I paused to admire the view across to Rannoch Moor and down Glen Orchy. Then I noticed even more people setting off from the station and I turned and fled upwards. 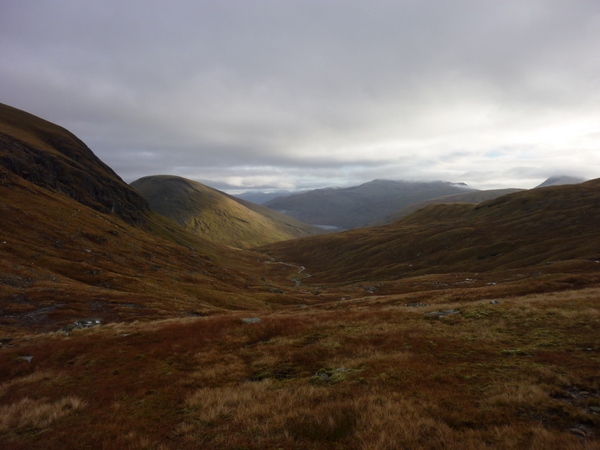 Once I reached the large cairn at the bealach I could see many of the mountains I'd intended to walk, Beinn a' Chuirn was glowing in the sunlight and I was beginning to regret my decision to leave the overnight gear at the car. Beinn Dorain was looking decidedly more grim in cloud. There were stunning views to the West of cloud clipped mountains and wisps of clouds in valleys below. The temperature was dropping as I ascended and I was soon walking through a thick frost and much earlier an expected I reached a large cairn which appeared to be the top, as I placed the Kuksa on the top and snapped away I decided I'd best check. Just as I was doing this the cloud cleared slightly and I could see a path descend and rise to another peak, ahh the true top. A few minutes later I was repeating the process and snapping the Kuksa on the cairn which was less impressive than the previous. 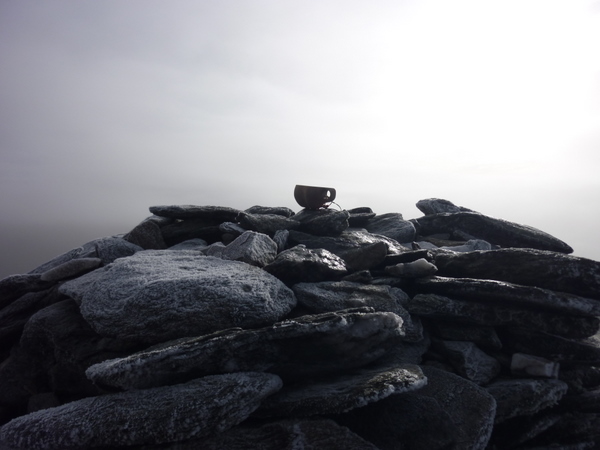 I had no views sadly, I hung around for 15 minutes hoping for a break in the cloud. The most I got was a glimpse of the road below for a second, my peace was shattered by 3 walkers shouting as if they were all hard of hearing. This was my cue to leave and I smiled as I noticed an ice axe being swung about, the only thing it would be sticking in would be his head the way he was waving it about. I said they looked like they were heading on an expedition, clearly they thought so too. 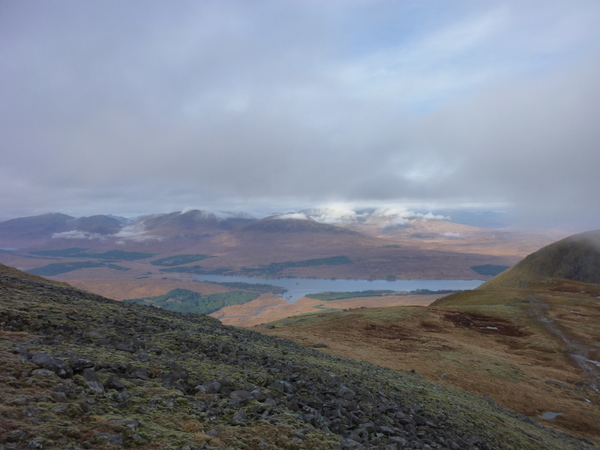 I almost jogged from the top, passing lots of very tired looking people. Back to the cairn at the bealach again there were 3 bags left there presumably while the claimed up Beinn Dorain thats clearly an indication you are carrying too much stuff, I didn't notice my day bag on my back. The cloud was now lower and and as I followed the path up Beinn Dothaidh it closed in even more and the path disappeared into more bog then couldn't be seen on the other side. I decided to head for a stream and follow it up, I then spotted another very faint path heading the direction I was aiming. The ground became less boggy and I was on a wide ridge, which I followed up to the summit. 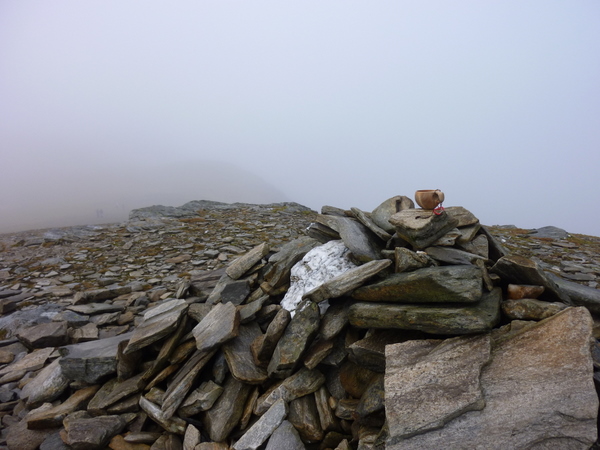 I decided not to retrace my steps and took a better route back down that was less boggy. I passed a group of 4 people who had been on the top of Beinn Dothaidh just before me. The bags were still at the cairn as I passed and headed back down now aiming for the Bridge of Orchy Hotel. Just to remind me I wasn't feeling a 100% I slipped while descending some wet rocks. I often think going slowly over areas you have more accidents when running your feet are never on the ground for very long and if they slip it doesnt matter you alreayd lifting them for the next placement. To prove this I decided to speed up again and had no more problems. Iw as being fueled by the thought of a latte and a log fire at the hotel. I paused a couple of times to take pictures and admire the views. 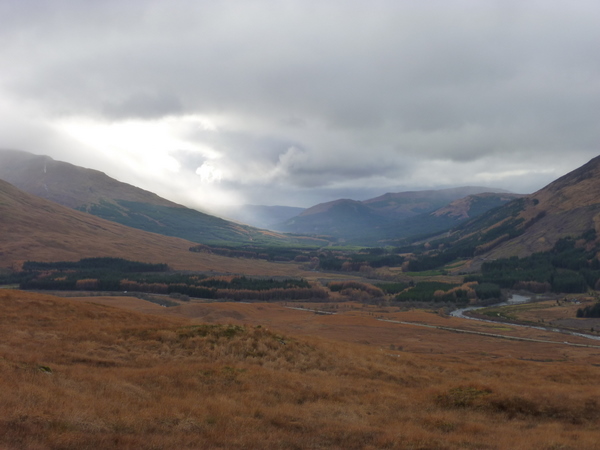 There was a nice fire going when I took my usual seat in the hotel, there were as many staff as customers so 2 lattes were downed before I drove South to the Real Food Cafe. I can recommend the new venison burger.