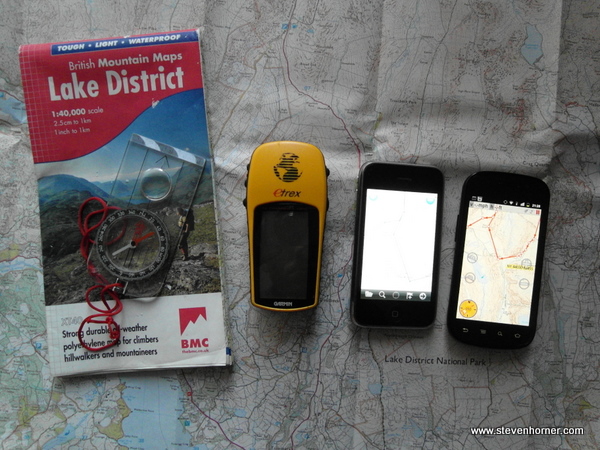 There are many who comment on the use of GPS in the outdoors and have the opinion that it is bad or even dangerous or just not right. You should only be in the outdoors using a compass and an O.S. map or failing that, use the sun and the stars to navigate your way across the wilds of the UK. Everyone is entitled to their opinion and to some extent I agree in part with this (compass part).

Now let me indulge in some of my past once again, going way back to when I was 10 and sat in Mrs Stewarts class in Peases West School. I had a reputatation for never shutting up, alledgedly to this day they have never known anyone talk quite so much. I was moved to a table at the back of the class with 3 girls, which somehow they thought would make me quieter. Next to where I sat was where the geography papers we had just started to work on were stored. I can remember during a lesson where we were supposed to be drawing I decided to take out my geography work and have a look. I was fascinated by the maps and can remember reading about grid references and the symbols used on maps. The only time I can remember shutting up for more than 2 minutes was during the geography lessons. During secondary school my favourite subject continued to be geography, maybe this was helped by the teacher Mr Maddison, who was enthusiastic and fair. My love affair with maps never went away, but I never had much cause to use them other than a road atlas. Obviously this changed when walking on my own and I was no longer following a map reader, usually my dad with his "shortcuts". 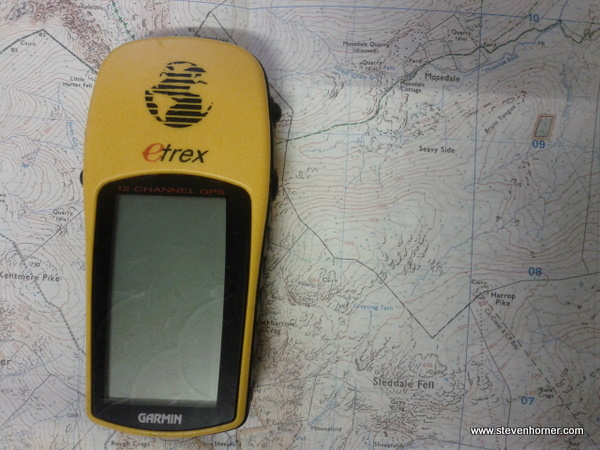 History lesson over (or was that Geography). Once I started walking more, I bought a GPS, a Garmin eTrex and Memory Map. The first test with the eTrex wasn't exactly as successfull as I hoped and I was watching the stupid direction arrow telling me to be 50 feet the wrong side of the fence. I soon learned to ignore the direction arrow and if following a pre-plotted route, just look at the route on the screen. As long as you keep on or near the line on the screen you were somewhere close. The first real test was on Cross Fell, when the fog came in and we could only see a couple feet ahead. A sense of relief was felt whenever you fell over a cairn, which confirmed we were on track (hopefully). This trip hit home just how useful a GPS can be. Yes you could use a compass, but the GPS was far quicker and easier to use in thick fog, when you can't even tell you a climbing up hill.

I don't quite understand why people can be against GPS, I believe you should embrace technology if it makes life easier or just more fun. I said earlier I sort of agree with people who say you should use a map and compass, I believe you should have the skills to do so. Batteries go flat, GPS can break and having a map and compass as a backup could save your life. There are negatives that I have been guilty of in my past to using a GPS. I have sometimes spent half of the walk staring at the GPS screen rather than looking at my surroundings and enjoying them.

The next evolution in mapping & GPS for me was when O.S. maps started appearing on GPS. I had an old windows mobile phone (SPV C500) that I connected a bluetooth GPS too and could then use Memory map on, this was fantastic at pin pointing where you were at a glance. The screen was tiny and it wasn't always the most reliable, but it was so much easier seeing a little dot marking your location. I then used Viewranger on a Nokia N95, this is still the best solution I have ever used but the phone died on me. I went back to a Windows Mobile phone with a larger screen for a few months to pin point my location. The larger screen made it more usuable and you could follow routes on the device. 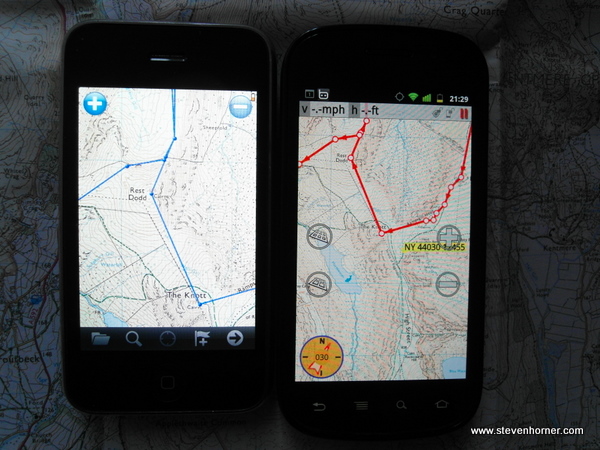 Well over a year ago O.S. maps started appearing on the iPhone. This was perfect I could use the iPhones excellent screen and carry one less device. The main problem with the iPhone is its battery life, but because of the battery life I started using GPS less.

I'm skipping over lots here, but other people have wrote plenty of reviews of the GPS software for iPhones all of which are better than what I'd write. The perfect solution I found was to plan the route in memory map on the computer, as I have done for years and study the map before setting off. Then if at any point you are unsure where to go, check on the phone where you are and which path/route to take. On the iPhone I normally didn't keep memory map running and tended to put the phone in flight mode if on a multi day trip, only turning it back on when needed. Whenever I stop for a drink or to admire the view take the paper map out and visualise the route you are taking and any notable features. I employed this strategy on my TGO route last year, I never once needed to use the compass, but had it in case it was called for.

Many may think this takes some of the romance out of walking, but the way I use GPS and maps now allows me more time to spend looking at my surrounding rather than looking at a paper map, taking bearings and following a compass needle. I now navigate more by sight (except in poor weather) following landmarks or contours I know I need to lookout for. This is also what you should do with a compass, but it's far easier to look at a screen and know in 2 seconds that you are going the correct way and not several miles off course.

Visualising the route from a map before and during the walk allows me to continue my love of maps, using an Phone with O.S. mapping allows me to indulge gadget love and employing this strategy allows me to constantly stare in awe at this amazing British landscape we call home. 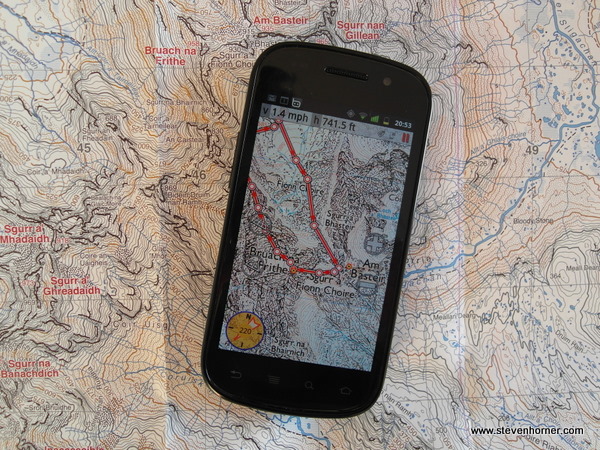 I switched a couple of months ago from an iPhone to a Nexus S running Android. I delayed the switch due to Memory Map not being available on Android. Yes there is Viewranger, but I already have an investment in Memory Map. ViewRanger is a better solution if starting from scratch except for the lack of a PC based program. You could get around this by using one of the many online O.S. map route editors. What I found instead of an official Memory Map app was the excellent MM Tracker which reads the Memory Map files. MM Tracker costs £5.76 for the full version which does everything the official app on the iPhone did, with new features added continually. The official Android app still hasn't appeared as far as I am aware and will likely cost considerably more.

** I originally wrote this article when I had many of the old devices mentioned and had taken several pictures, sadly somehow I have lost all the original pictures and I no longer have the windows mobile or Nokia devices. Apologies for the poor quality pictures.

Failure, I think not