The most successful projects, to me at least, are those where you learn so much more than you ever expected to. I started the Peak Visibility project to find the answer to what seamed like a very simple question "Which Scottish Mountain can you see the most?". You can find out how this question arose in the first Peak Visibility post or at the end of this post.

It was not quite as simple as I had thought, the first thing was to define the question more specifically.

I decided to limit my criteria to Munro (mountains in Scotland over 3000 feet), this reduced the list considerably down to 282 mountains at the current count. I then set the criteria, which I defined as "If I stood on the highest point of the mountain (summit) what land would be visible", this would give me the answer "Which summits could I see from any point in Scotland". I also decided I could also work out "If I stood on a Munro summit which other summits could I see".

The Top 10 most visible Munro in Scotland.

The table above may be different to many would have expected, yes Ben Nevis and Ben Macdui are in there. When you actually think about it they both have some very large neighbours which block the view. Both also have quite large summit plateaus. For a view on Ben Nevis I have always walked away from the summit, close to the edge. I am still waiting to see anything though after 7 cloudy summit visits.

The top 2 Stob Binnein and Ben More are next to each other and are often tackled in a single day walk. There are not too many other high mountains within the immediate vicinity. If you ignore the few Munro to the South West, the next closest Munro is 5 miles away (Sgiath Chuil) and is quite low.

Compare that to Ben Macdui which has Braeriach and Cairn Gorm very close along with a host of other Munro in all directions, these block the viewability yet Ben Macdui still manages position number 4.

The Least visible Munro in Scotland 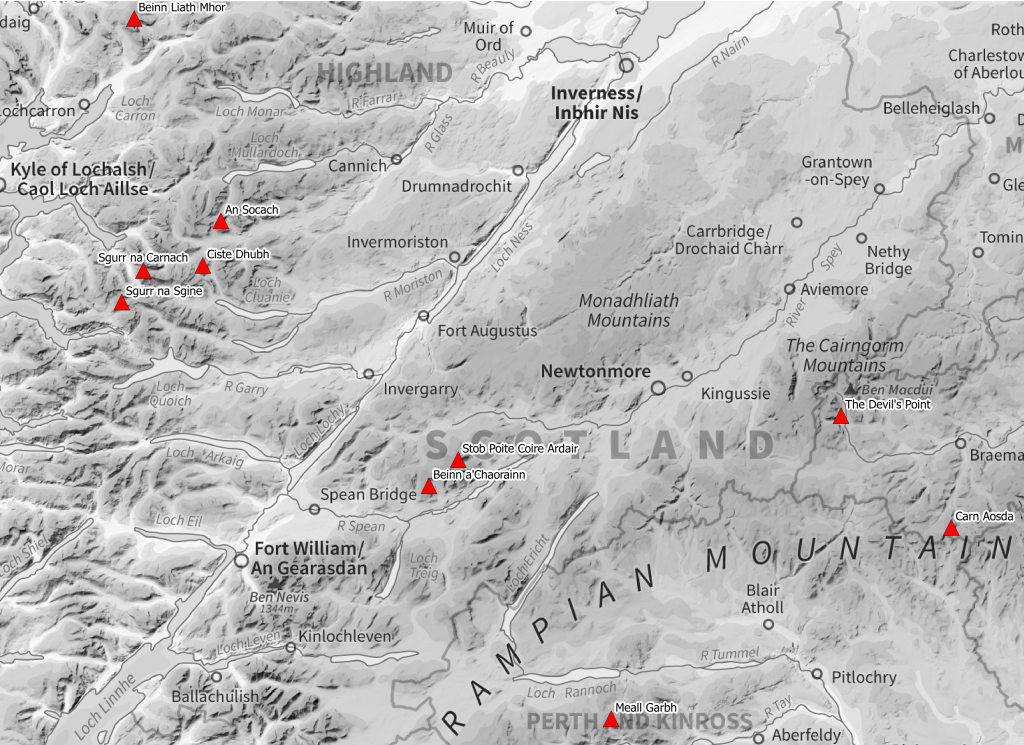 The Visible Area column of the 2 tables above show the number of square Kilometres the summits can be viewed from (or be seen from). The higher the number the larger the area it can be seen from. Something to note, these figures are on land only. I masked the sea, but does includes visibility from land locked lochs.

I mentioned that I could work out which other Munro you could see from the top of each Munro. Looking at the data this way gives a different list.

There are a few similar names in the list, Ben Macdui, Ben Nevis and Ben Lawers but Geal-charn?

I will be honest that I had never heard of Geal-charn yet there are actually 4 Munros with the same name, 2 "Geal-charn" and 2 spelt "Geal charn" without the hyphen. The one in the table above is North West of Ben Alder at grid ref NN469746. This almost topped the list, until I re-ran the data in newer software it was relegated to Number 2.

For a bit of fun I decided that from the data I have produced I would create 2 new Classifications like Munro, Marilyns, Wainwrights etc. The new ones are Horners and Tracis.

A mountain summit which can be viewed from 1000 square Kilometres excluding from the sea. There are currently 112 Horners and if you have completed the Munros then you have done them. This will change though and will expand to include all of Great Britain (Scotland, England and Wales).

Why create more classifications, becuase many of us like lists and these are slightly different to the thers which are normally based on height and/or drop.

You can download the list of Horners below, this list can easily be linked to The Database of British and Irish Hills by using the Number column (it is their number).

Download the Horners in the following formats: CSV, SHP, GeoJSON.

A 3000 foot mountain summit where you can view at least 100 other 3000 foot mountain summits. There are currently 75 Tracis all in Scotland. It doesn't take a genius to work out that there will be none in England or Wales because there aren't enough mountains over 3000 feet there to make the grade unless you can see enough of the Scottish Munro from the Skiddaw.

Why call these Tracis, they are named after my long suffering Girlfriend who has had to put up with me working for weeks/months on the Peak Visibility Project often late into the night while she is trying to sleep with me randomly talking to myself working out heights, distances, projections and various other related stuff. The Tracis are also something special just like her, oh and she will likely have to put up with me dragging her up all of them.

You can download the list of Tracis below, this list can easily be linked to The Database of British and Irish Hills by using the Number column (it is their number).

Download the Tracis in the following formats: CSV, SHP, GeoJSON.

So what happened to Schiehallion?

Schiehallion is down there in position number 83 on Visibility. Something to be aware of is that the whole data is worked out on the visibility of the actual summit. If you have ever walked up Ben Nevis via the tourist route you will know you can't see the summit until near the end of the walk. The summit is completely hidden by the mass of the mountain. So thinking about it a mountain that is pointy, quite high and not surrounded by too many high mountains should rank highly.

Errors, thanks and stuff

I will start by saying I am confident this data is not 100% accurate. Much like the Munro tables were not accurate and have been gradually updated over the years, so will the Peak Visibility Project along with the Horner and Traci classifications.
I will go into more detail over on the Peak Visibility Github page over the coming weeks, where you can also find much of the raw data and results but I'm going to take a little break from it, so don't expect to to see full explanations in the next couple of days.

I Would like to thank Michael Spencer (Scottishsnow) for a few helpful pointers early on in the process and his Caleb's List post which gave me the spark I needed. His site is well worth following. I also need to thank or blame Phil Turner who if he reads this will probably wonder why, he pointed out Schiehallion one winter while walking from Bridge of Orchy to Kinlochleven and mentioned it being one of the most visible mountains, that stuck.

I mentioned at the start that the most sucessful projects are those where you learn, in the course of this project I have worked with Virtualization, Ubuntu server, Ubuntu Desktop, QGIS (1.8, 2.0.1, 2.1.0), GDAL, GRASS, python, projections and a multitude of other stuff. I thoroughly enjoyed the process.

To produce the data and results I have used a variety of data from the following sources:

Maps on this page use Ordnance Survey OpenData which is © Crown copyright and database right 2013.